The Hydra ECU can control boost via a boost control solenoid valve.
I had one lying arond from my old Link ECU setup which is the same unit recomended for the Hydra by FM.
The installation is pretty straight forward. Splice some wires to some other wires going to the diagnose connector and connect pressure hoses from the actuator to the pressure source.
I found a bracket that I could use to mount the solenoid out of the way. 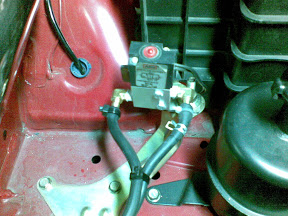 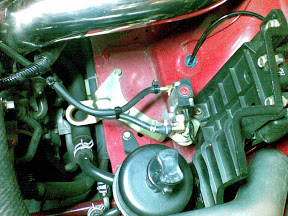 The EBC is activated by connecting a 2D map to the reserved output.
The standard setting is pretty conservative.
Actually I did not notice any change after activating it and had to do some manual checks to verify that the solenoid was working.
After raising the values in the 2d map i definitely felt a change as the boost peaked at 17 psi and hit the boost cut at 4K rpm. After some experimenting i got it to touch 14-15 psi at around 4K but I was not able to hold more that 10-11 at the end of the rev range.
The change is very noticable in the mid range and all the way to 6K before the boost taper off to 10-11 psi again. The car really screams when on boost :) Traction in lower gears can be a problem..
Datalogs show A/F values to be on the rich side but the boost still peaks over 15 psi in higher gears when doing a pull from under 4K. To be sure I have set the bost to around 12 psi until I figure out how to control the peak and increase the boost over 6K rpm.

The boost control setting in the hydra is not exactly what I had hoped.
Further datalogging shows that only 3 zones in the 2d map is in use. There might be other settings in the PID controls that will fix this problem.
The other thing that's bothering me is that the boost varies with air temperature.
If I don't find a solution to his problem I have to go for the MBC instead.

Just to preserve my older blog entries that was running on my old server that will crash and burn any day now I added all the posts into this blog. The blog was called www.itsgonnablow.com and was about my previous 96 MX-5

Starting a car for the first time after upgrades are always exciting. Especially with a new ECU. Before turning the key there are a couple of things that need to be calibrated and configured with the Hydra software: - downloading the preconfigured FM map