My previous attempts on holding a stable 1 bar of boost without overshooting at ~ 5000 rpm was not succesful.
I had hoped that porting the WG would fix the problem but it alomst had the oposite effect according to the datalogs.
To try to control the boost peak I got hold of a Greddy Profec E-01 electronic boost controller that previosly was used in my friends turboed NA.
This baby got some useful functions including RPM boost offset that makes it possible to tune the boost solenoid duty cycle at configurable RPM points in the rev range.
One other obvious advantage is that boost can be controlled without hooking up the laptop and play with the Hydra 2.5 worthless boost control implementation.

Pics of the unit:

Mine is painted black by the previous owner.

Install was tricky. I have too many wires from the hydra, dashlogger etc. complicating things under the dash.
I rerouted the BOV-vacum source to the one used by the charcoal canister to avoid it messing up the MAP signal for the ECU and the new MAP sensor that is used by the EBC.
The EBC also needs a RPM signal which I found in the DIAG box.

Some pics of the install in the engine bay.
The second solenoid used by the Hydra has been removed. 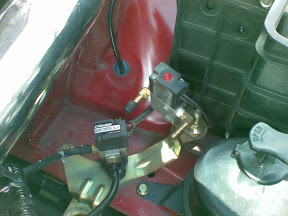 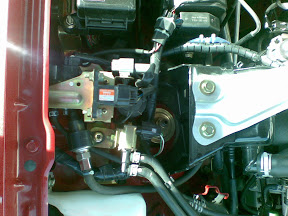 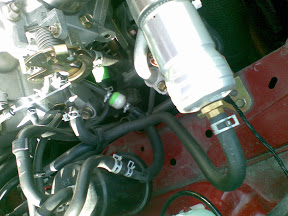 I struggled to find a decent locatoin for the display but managed to find a nice bracket designed for an iPod/phone that could be used for mounting.
The controller is atached by the shifter for easy operation: 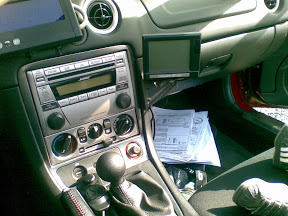 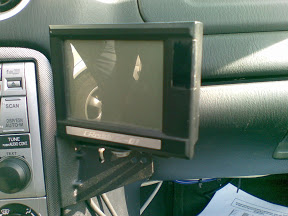 After som initial tuning I got the RPM offset to work as planned.
I can now hold 1 bar of boost all the way from 3900 - about 6500. After that it falls of to 0.8-9 regardless of what I dial in.
Anyways its a big improvement from the MBC.

First NSK trackday for me this year. I really like the way they organize things and the fact that drifting is not allowed. This attracts a different crowd of cars that is more into doing fast laptimes instead of shredding tires. I took the