Despite the PWR alu radiator and oil cooler my engine tends to overheats at the track.
After about 5-8 laps with 20 c ambient temps my coolant reaches 110 which is at least 10 c above my comfort level.
Upgrading the turbo and extracting more power will certainly make things worse.
There are several things that can be improved on to get the temps downr.
- Better ducting to the oil cooler.
- Coolant reroute
- A less restrictive IC that lets more air trough to the radiator
- Vents in the OEM alu hood.
- Remove AC
- High flow fans/shrouding
Lets take a closer look at each alternative
Oil cooler
I have already mounted an external oil cooler described in another blog post.
This is to cool the oil, but it will have an effect on the temps in the rest of the engine as well.
It can be improved by creating some ducting to prevent air escaping around the cooler.
My plan is to do this while I have the car on jack stands.  Just need to get the turbo stuff finished.
Coolant reroute
This means moving the coolant exit from the front to the back of the engine.
All the FWD Mazda's equipped with the BP engine has this layout including the GTX and GTR turbo versions.  This will make the coolant run trough the engine instead of having both the intake and exit at the front of the engine.  This should aid cooling, at least on the rearmost cylinders. 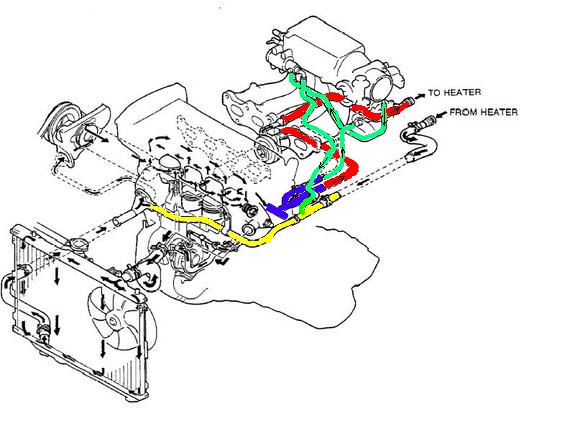 There are several ways to do this and most of them is described here:
http://users.telenet.be/miata/
I'm not totally convinced that this will solve all cooling issues.  It will definitely make the coolant more efficient at the back of the engine but I have not seen before and after testing on a race track that has me totally convinced.  The Mazda engineers partially solved the issue on the Miata by having a constant flow trough the heater core thus cycling the water at the back.
If nothing else helps I'll give it a try.  BEGI got a complete kit that cost $$$.  It could be done very cheap with a NA 1.6 thermostat housing and a JR spacer from moss as described in the URL but needs some welding.
Free flowing IC
By this I mean an IC that does not block/rob too much air flow from the radiator but still has high efficiency and acceptable pressure drop.
A dude called "2/3rd'sCobra" on forum.miata.net recently did a comparison with his old FM/BEGI IC and a new PWR unit and saw great results on both the IC and radiator efficiency.
The tread is located here:  http://forum.miata.net/vb/showthread.php?t=320187
Cardomain site with more info:
http://www.cardomain.com/ride/856245/17

Before I do anything drastic I need to know if the new style FM IC that I have is crap.  If I'm not mistaken its a regular eBay china IC.
The TDR unit would be a safe bet but costs $$$ and needs altering to fit my custom turbo setup.
Vented hood
To get good air flow trough the radiator the pressure differential needs to be as high as possible.  High pressure on the outside and low pressure on the inside.  A stock Miata is designed to escape air down trough the transmission tunnel.  The extra turbo hardware and other hoses makes this harder and pressure builds up in the engine bay while the turbo produces more heat in both the engine bay and cooling system.
A solution is to vent the air trough the hood as this is a low pressure zone.
The Mazda 323 GT-R has a vented hood from the factory and works great.
As far as I know the only vented aftermarket hood for the NB is the Chaser Aero hood that might be produced if the group buy has enough buyers: http://www.mazda-speed.com/forum2/index.php/topic,16819.0.html
An alternative is cutting your OEM hood or getting one from the scrappers.
I need to look into the cost of letting someone make vents for me without needing to repaint the hood.  It could be a problem as there is quite a lot of reinforcements on the underside that might need to be trimmed/removed.  After seeing how the hood bends in 200+ km/t that might not be a good idea.  Also it needs to look stealth and OEM like.
Remove AC
The AC condenser is not very thick but certainly robs flow from the radiator.
Since I also use the car on the street it stays put with the rest of the heavy AC components.  It's very handy while standing in line before entering the track on track days as well as being able to actually have the roof up on warm days.
High flow fans/shrouding
If air won't flow trough the radiators by itself a couple of fans can do the job.  They create a low pressure zone by removing air behind the rad and drawing air from the high pressure zone in front of the car.  In a perfect world this should not be neccesary except when the car is not moving.  To make the fans work more effective a shroud can be added.
I think the stock fans on the MSM does a decent job but a couple of Spal fans delivers more CFM.
These are the values for CFM and current draw from Miataroadster.com:
Fatcatmotorsports.com also sell a shrouded fan kit but they claim the Spal fans flows over 1700 CFM each.
Any way, its an improvment over stock.  If a coolant reroute doesn't work this is the next step.

The turbo needs to be clocked to get the center section aligned correct for the oil drain.Both the compressor and turbine bolts needed to be loosened.  I suspect the bolts wasn't torqued to the recomended specs as all felt very loose.When testfitting

I now pretty much have all the parts needed to start the car. The exhaust will be very temporary but enough for a testdrive. I installed new exhaust studs from MiataRoadster. The nuts looks a little wimpy. Maybee thats a good thing as the