The NB mounts the seat belt in the slider, not in the transmission tunnel as the NA. This means you have to keep the OEM sliders if you want to use a x point harness. The problem is that if you are tall like me and needs a couple of more inches to fit a helmet under the roof the stock tall sliders wont work.
Actually, one of the things I don't like about the NB is that it feels like you are sitting "on" it instead of "in" it like the NA. I have not measured but I would not be surprised if both the under carriage and the two sections it is resting on is taller.

I got some belt mounts including eye-bolts from kollevold.no which is meant to be welded on the inside of the transmission tunnel or wherever you want it.
Since I did this when the transmission was out there was lots of room. I ended up having it on the exact same place as on the NA.
I did not weld it in place. Just used a big ass washer on the inside and clamped it tight. The metal at the location is very thick. It looks like there is 3 layers of metal at least. There is no chance that the mount will be ripped trough the tunnel. Some pics: 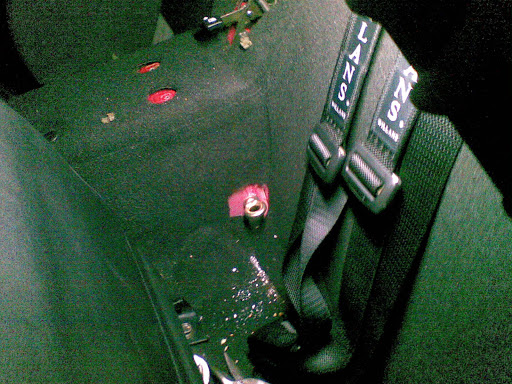 Next job is to fab some up som solid mount for my Sparco Sprint seat.
I really don't need the undercarriage as the only one driving this car is my self.
Nice to get a bit more distance from the rollbar as well.

I have been busy a couple of weeks doing fun stuff like going to the Nordschleife with the mighty RatX5 and some other non car related stuff. As I mentioned in my last post the WG pipe needs to be welded into the DP

Changing the clutch on a MX5 might be one of the shittiest jobs you can do on the car. I have done it twice now and it doesn't get any better. I probably used 3 evenings cursing under the car. Lots of extra work