I need to decide which Rotrex supercharger to use in my next engine setup.
My goal is 400whp max @ 7200 rpm with no more than 25 psi of boost.
I have no idea if this is possible but writing this blog post might give me the answer.
I did a similar post when choosing turbo some years ago here:
http://www.mazdaspeedy.com/2009/01/which-turbo.html
I will try to use the same method for the Rotrex compressor flow charts and see which of them is best suited for the job. See the above link for how to read compressor maps, calculate engine flow, surge line, pressure ratio etc.


The maps and other technical data for the Rotrex compressors can be found here: http://www.rotrex.com/Home/Technology/Product_Technical_Data.aspx
Their C-type range of superchargers consists of C15, C30 and C38 with different sizes inside each family of superchargers. 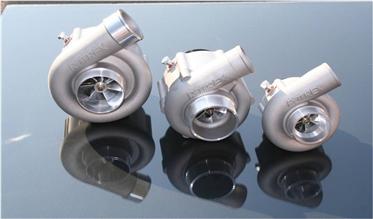 I will be looking at the C30 and C38 variations.
I think each family shares the same gearbox and dimensions while the 2 digit number at the end  is the size of the compressor wheel. But I could be wrong.
There is one big difference when looking at compressor charts for centrifugal superchargers compared to a turbo. A turbo engine with a proper sized turbo will most likely have full boost at half of max RPM. It's then common to plot two points at the same PR for say 3600 rpm and 7200 rpm and draw a flat parallel line trough the efficiency islands you are operating in.
No such thing for the centrifugal compressor like the Rotrex which has boost increasing with the RPM.
Basically 2 x RPM gives you 4 x flow which makes for a steady rise of boost in the RPM range somewhat influenced by changes in VE.
This is a boosts vs. AFR dyno plot from Trackdayhookay's C30-94 build thread @M.net which illustrates this.  3.75 psi boost at 3500 rpm, 15 psi boost at 7000 rpm.

A typical boost graph for a similar sized turbo would be flat from around 3-4K to redline and producing a slightly parabolic super fat torque curve typically maxing out at max VE.
To maximize the potential of the Rotrex you need to gear it so that max blower RPM = max engine RPM. If you under drive it you will lower both the boost and torqe curve over the entire rpm range. This is where turbos have a huge advantage compared to crank driven compressors as the boost controller will ensure xxx psi is produced at x engine RPM as long as there is enough exhaust driving the turbine.
( Hmm, after writing that section I kind of wonder why I ditched my turbo setup... LOL )
Since the engineers over at Rotrex prefers flow numbers in Kg/s (?) when making flow charts I need to convert my CFM flow numbers;  KG/s = ( CFM/1731.8)
I used the calculator @ http://www.lovehorsepower.com/CFM1.htm + some simple conversion in Google Docs to come up with the numbers in Kg/s based on 1.9 litre engine and 90 % VE:
https://spreadsheets.google.com/pub?key=0Agsg7psZwDn8dDBzOU14cFAxQXZhWHZoaXFGakJiN1E&hl=en&single=true&gid=1&output=html
I used 90% VE based on "common" numbers for modern 4-valve pr. cyl engines.
Since I will be spinning my compressor at max RPM to maximize power trough the rev range I need to do this at the max engine RPM.  For the C30-94 compressor this means I would like to hit 100 000 blower RPM at 7200 engine RPM.
The flow charts have plotted lines for blower rpm including the rpm limit.  These lines tell me at which PR the compressor will hit x RPM which I can use to find Kg/s flow numbers @ engine RPM in the google spread sheet.
As long as max blower rpm = max engine rpm I can easily find engine RPM @  x blower RPM :
Engine RPM = ( Blower RPM / Blower max RPM ) * Engine MAX RPM 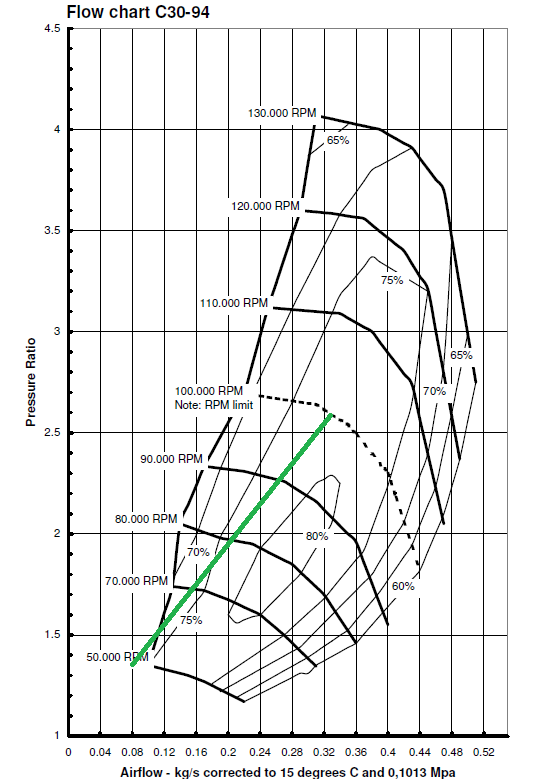 Quite good.  The compressor will work in the 75% efficiency island trough most of the RPM range.
It tops out at 23-24 psi and 0.33 Kg/s ~ 572 CFM
This compressor have been proven to give 350 whp on a BP 1.8(9) with RB headers, custom tuned IM , 99 head with integral intake cam ++. I would be happy with that power figure but mine would probably not get more than 300 whp with my initial setup.  Due to pressure loss trough the IC the pressure after the TB would be less than 20 psi. 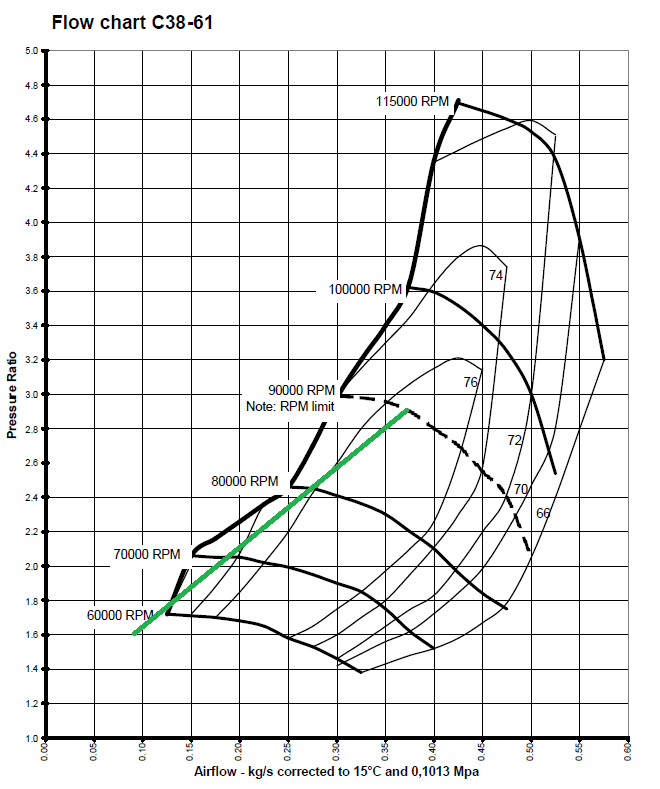 Here we can see that the compressor will work closer to the surge limit but are still at 75-76% efficiency for the most part of the usable RPM range. Thats actually better than the C30-94.
This baby will deliver 0.37 Kg/s ~ 641 CFM @ 28 psi
That might end up at 25 psi at the plenum ? 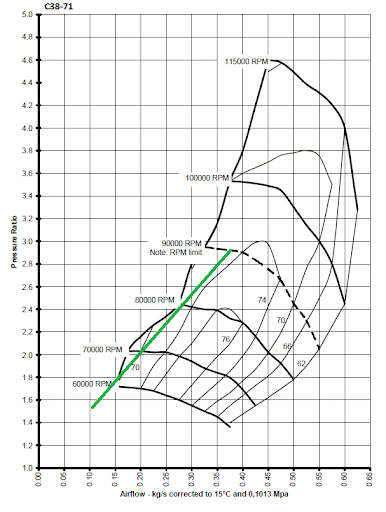 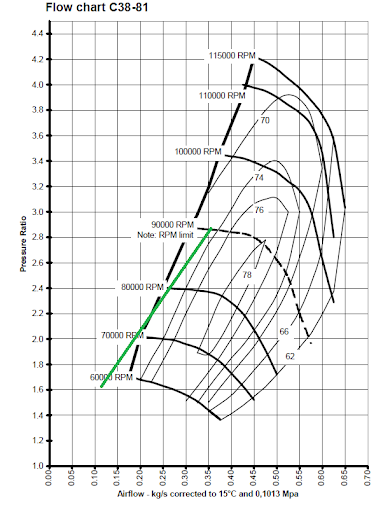 No good. Operating range very close to surge on the C38-71 and the C38-81 has massive surge up to 6000 engine RPM.  The puny 1.9l can't chew trough all that air fast enough making the compressor build up pressure without flow or surging.

Just to try another aproach i tried the turbo aproach by just plotting flow numbers from spread sheet for max engine RPM and (max engine RPM) /2
Like I mentioned earlier 2 x rpm ~ 4 x boost with a centrifugal compressor.
That means I need values for (max RPM)/2 at (max PR)/4 and max RPM at max PR.
Lets do this for 15, 20 and 25 psi.
Coordinates used for drawing the line. 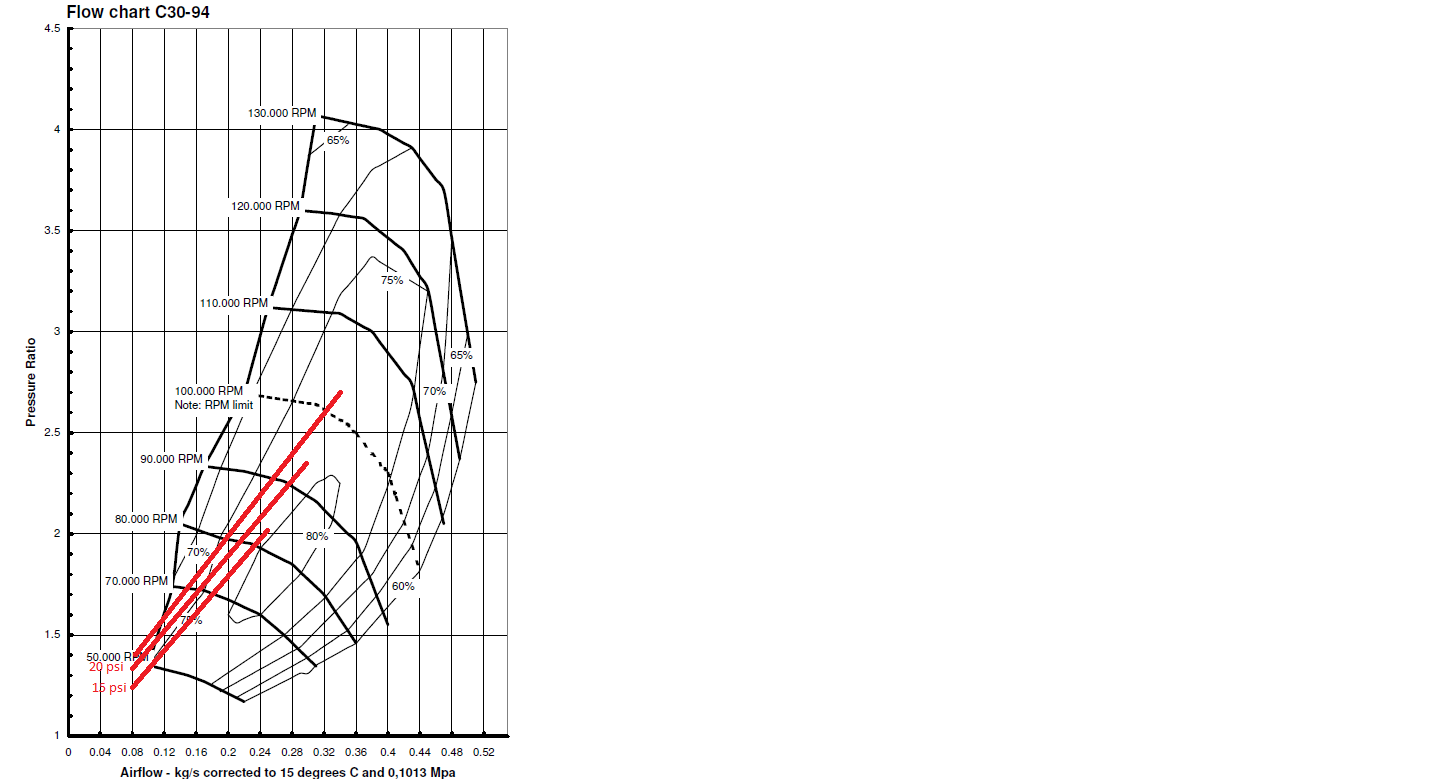 The 3rd line missing a label is the 25 psi line.
If I imagine a 23 psi line between the 25 and 20 I will pretty much end up with the same plot as my first try.
I guess my method was correct (or both are equally wrong..)

Well, to get to the bottom of this I asked Mr. TrackDayHokey (lets call him TDH) himself in his build thread: (I'm arildhof): http://forum.miata.net/vb/showthread.php?t=352533&page=3

He was kind enough to add his estimate of flow in the map (red line): 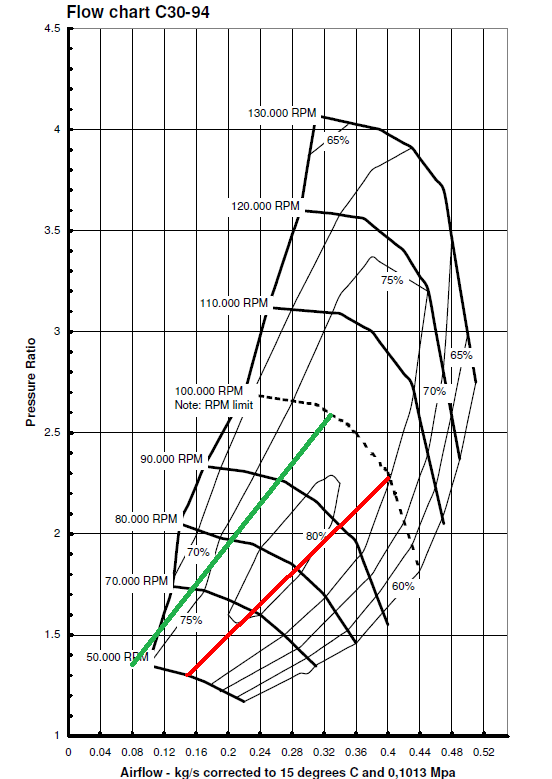 Thats about ~0.07 KG/s   or 121CFM more than my flow calculations.
I did a quick run with VE of 105 just in case his reworked head is made of pure magic but that doesn't give more than 0.33 KG/s at 17 psi. I don't get it.  There must be something wrong with ... something that is wrong...  If someone actually reads my blog and can spot my errors please post a comment as I would like to get to the bottom of this.

Anyway,  TDH has moved on to the 2 steps bigger C38-71 and estimates 430whp at 22 psi.
If the dyno agrees that is amazing numbers for a BP engine and such modest boost.
This is exactly what I was hoping for.  ref. my goals at the start of this blog post. My life needs moar C38-71.

However, it turns out that TDH made his own bracket and that Kraftwerks have no plans of making one for the BP :-(     F***!.  Life is so unfair...
I'm not in the mood for DIY'ing such a critical part. It would require some fancy costly R&D, CAD and CNC work to look good.
That means I will be rocking the girlie sized C30-94 instead.  Good news is that will save me $800 and my engine will probably thank me and live a happy reliable life at the racetrack all trough 2011.  I don't have the fancy custom manifold, baller exhaust manifold or killer cams to make 350whp but will aim for 300 and take it from there.

Looks like www.jenvey.co.uk will start producing both IRTB and a FI manifold for the BP. I stole some pics from Malcoms excellent Miata race car build thread: Så dette fra denne tråden:   http://www.mx5nutz.com/forum/index.php?showtopic=45768&

90% of drift videos are crap.  This one is not. Autumn Drift Matsuri 2010 - Ebisu Circuit, Japan from Remi Schouten on Vimeo.