I made a preliminary Rotrex map based on my N/A map and the old 3017 turbo map.  I basically modified my finely tuned N/A map with the ignition and fuel values from the the turbo map above100kpa.

Here are the numbers:

I had to enrich the fuel quite a lot in the midrange.  Strange, that means I'm burning more fuel to make the same A/F target = more air goes trough the engine at the same boost :)
I'm running a failry conservative ~ 16 degrees timing.  I'm confident that I can raise that to 18 without any problems but I want to mount the det can and EGT probes first. 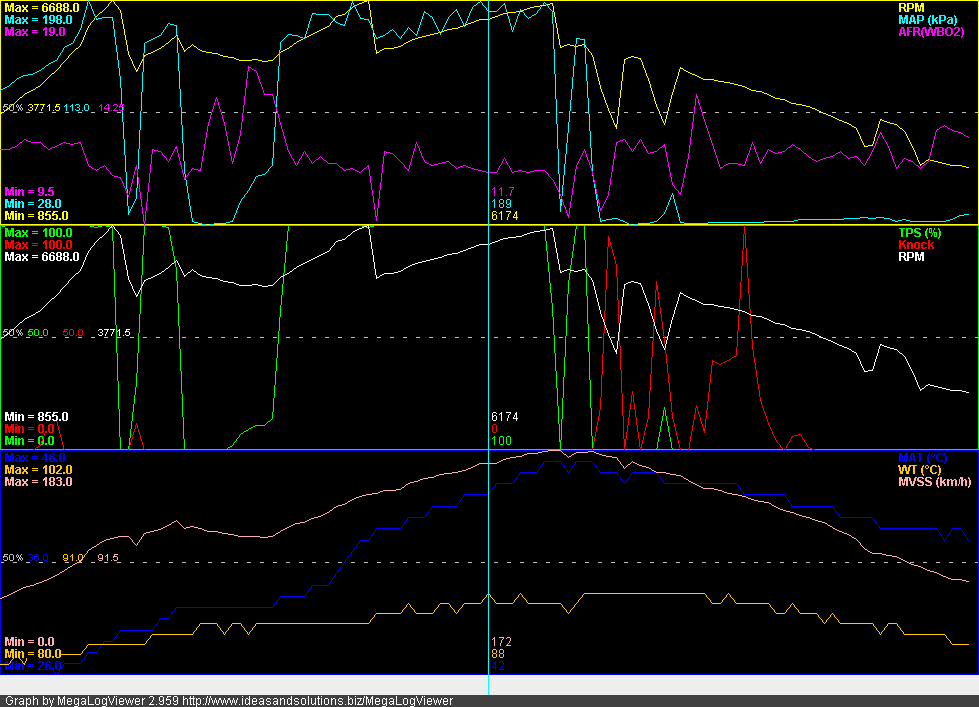 IAT: 40 C, ambient ~ 7 C
AF when in boost ~ 12-11.5
Max boost for log 1 bar. Some jitter on top. Not sure if it is belt slip or just shady data logging.
The knock after throttle lift off is probably noise. I dialed out some genuine knock at around 3500 by lowering timing 1 deg.

First impression.
The car is fast!  However, the turbo kick in the pants never happens.  From 0-4K it's more like driving a bigger displacement engine but after 4K the exhaust note changes to a more aggressive sound combined with the compressor whine and you progressively get the same rush as from a turbo.  However from 6-7K the engine just screams like crazy and feels very unrestricted compared to a turbo where the tq starts  falling at the end.  Having 4.1:1 and 6-speed will be handy for keeping the engine in the sweet spot.
The throttle response is amazing, and thats with the non existent map filtering in the v9.0 Adaptronic fw.  Once I got the map fine tuned I'll try upgrading to 10.2.

My next priority will be shielding the intake piping from the exhaust and an air box.  I think +30 C IAT is a bit too much.  I also need to find out the pressure drop across the IC and the exhaust back pressure.
Right now I'm very pleased with how this turned out.  No sign of failures in the Rotrex setup and I'm boosting 1.1 bar after the first tuning session!.  I have the same drive-ability as N/A on cruise and a sh** load of power up top.

New plans and new priorities have lead me to putting my project car for the last 5 years up for sale. http://www.finn.no/finn/car/used/object?finnkode=35622609 It has been a fantastic 5 years of ownership, and as usual I

I took the car out for a short spin on Sunday just to to properly bleed the cooling system with the reroute.  Since the header wrap is new and smokes a LOT I could not run it inside the workshop for more than 5