I have had a race seat installed in all of my MX-5 that I have used on the track. Both for better support but also to get more head room with a helmet on.  Its pretty easy on the NA/NB to put a bottom mount Sparco Sprint V on the stock sliders with a set of new holes but on the NC this is not possible as the rails are further apart.

My first try was to modify some Sparco side mounts for mounting directly to the floor between the stock  mounting points.  This could have worked if the floor actually was flat, which is not the case as there is a lot of dampening and other stuff on the floor. Too bad as this would have positioned the seat as low as possible.

Goodwin has a steel frame that fits like a glove in the OEM mounting points.
I don't need rails so I drilled som new lower holes on a set of Sparco side mounts. 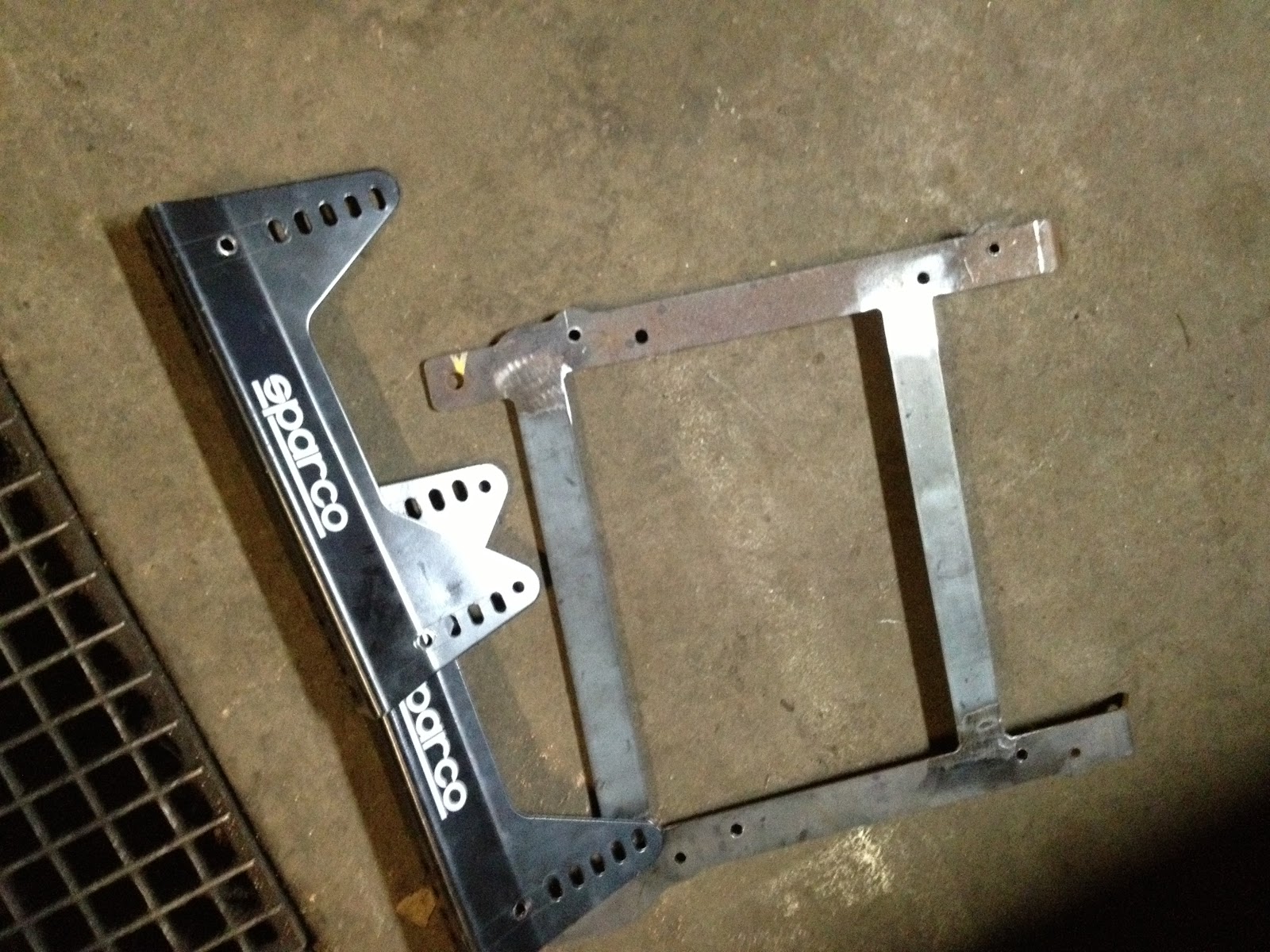 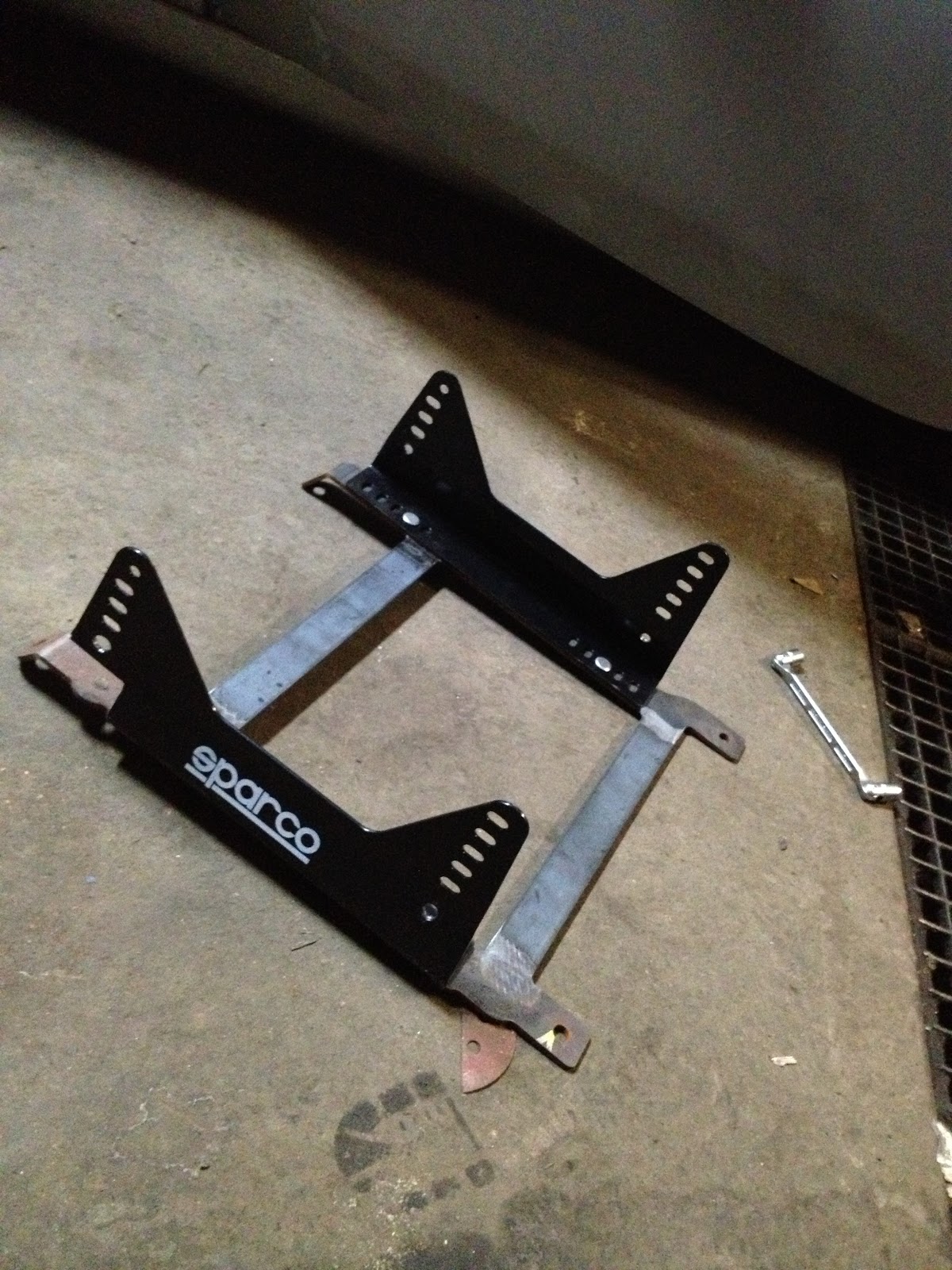 Here is a pic of the underside mounted to the Sprint V seat.  The crotch strap eye bolts are mounted on the frame.  The Scroth harness install manual says that they are not allowed to share mount points with the seat but also points out that the majority of the force will be on the lap- and shoulder straps which is mounted solid in the tunnel/sills. The crotch strap is there to keep the lap belt correctly positioned to avoid submarining as the shoulder belts will want to pull it up. Im not worried as the steel frame is very solid.  I hear people say that the seat mounts does not matter that much since its the belts job to keep you stationary.  That is not the case as long as you are tightening your body against the seat.  If the seat loosens in a crash the belts are not that snug anymore and you can get tossed around into other parts of the car. Especially  in a roll side support would be non existent. 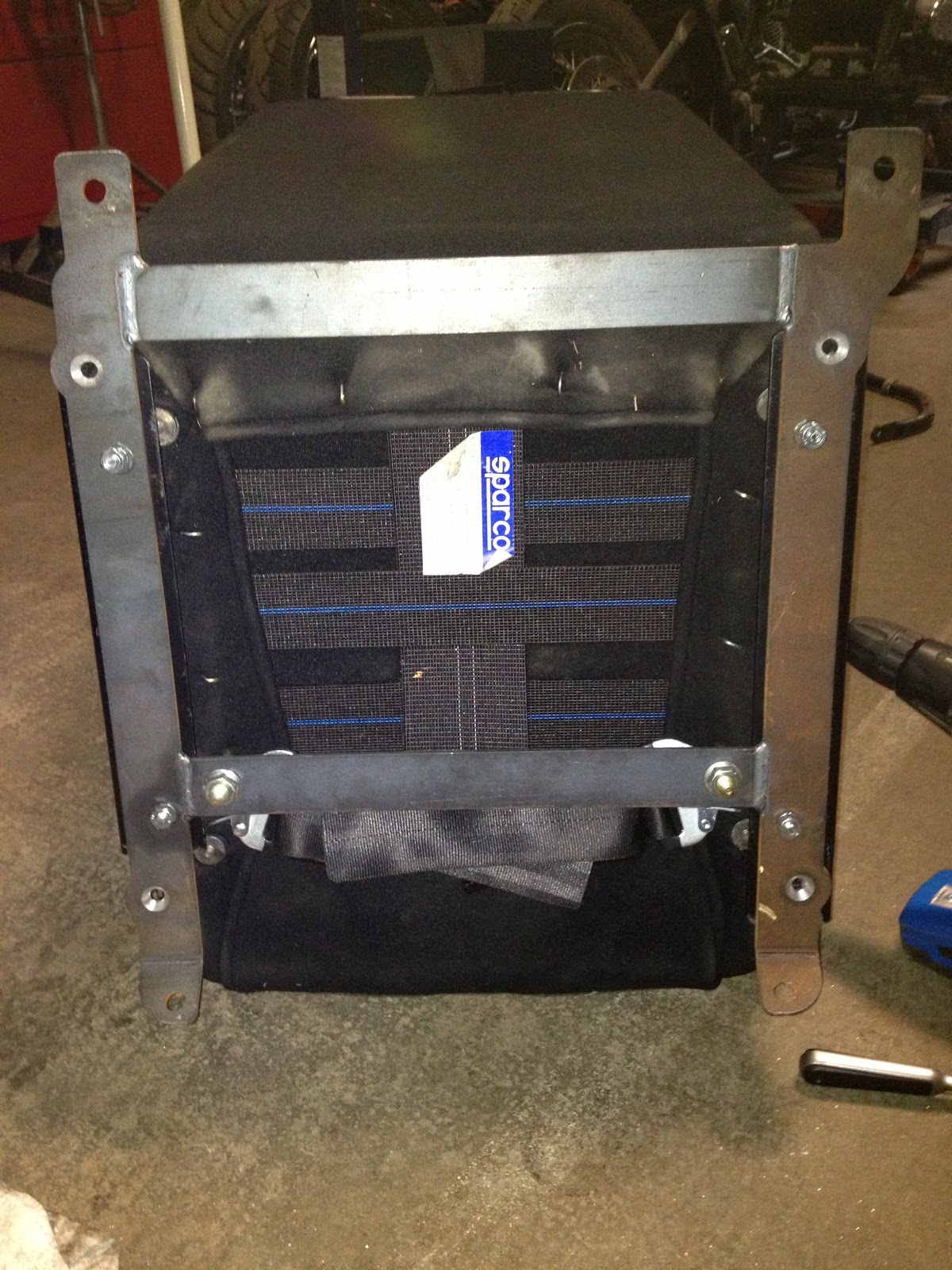 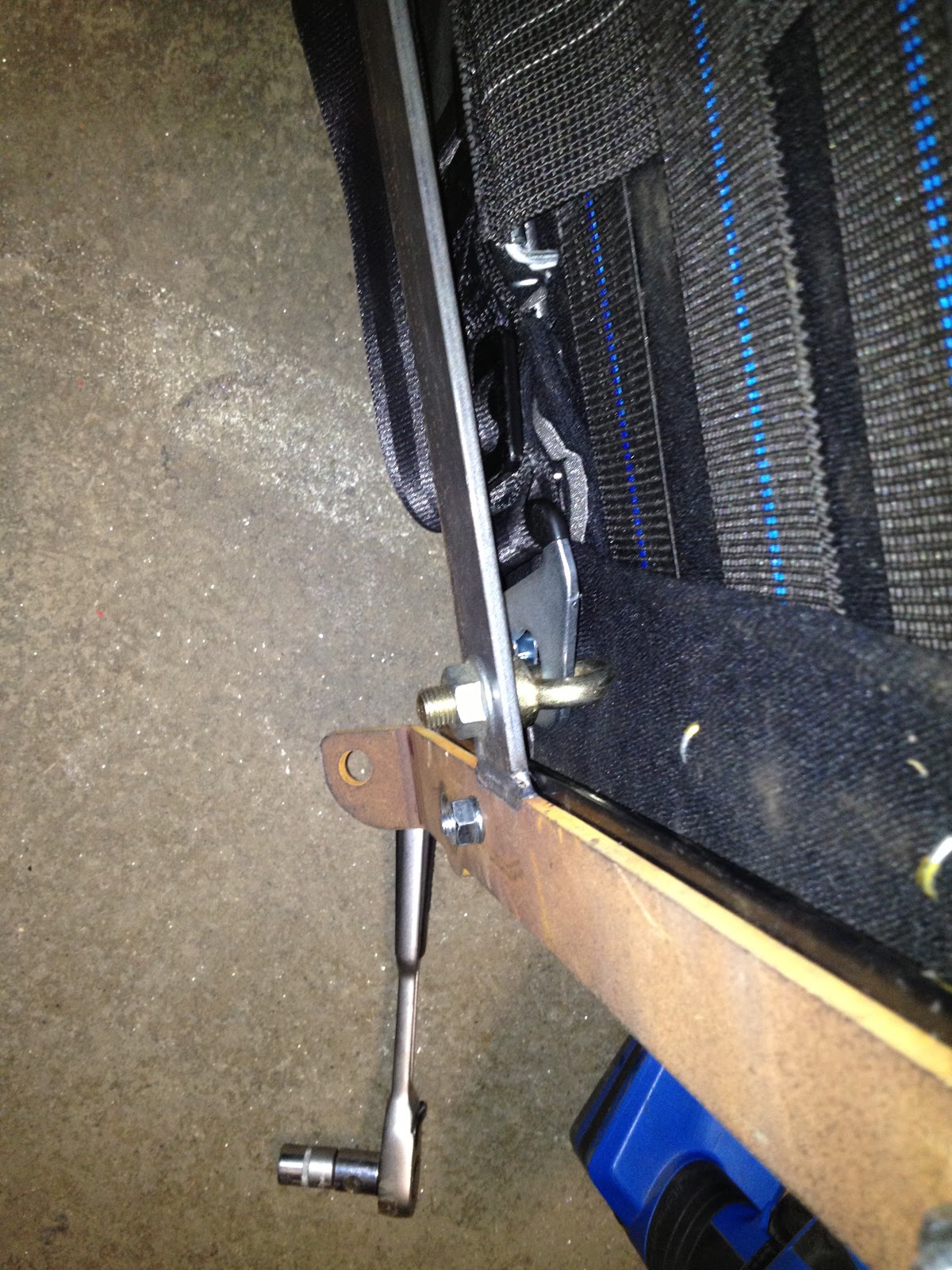 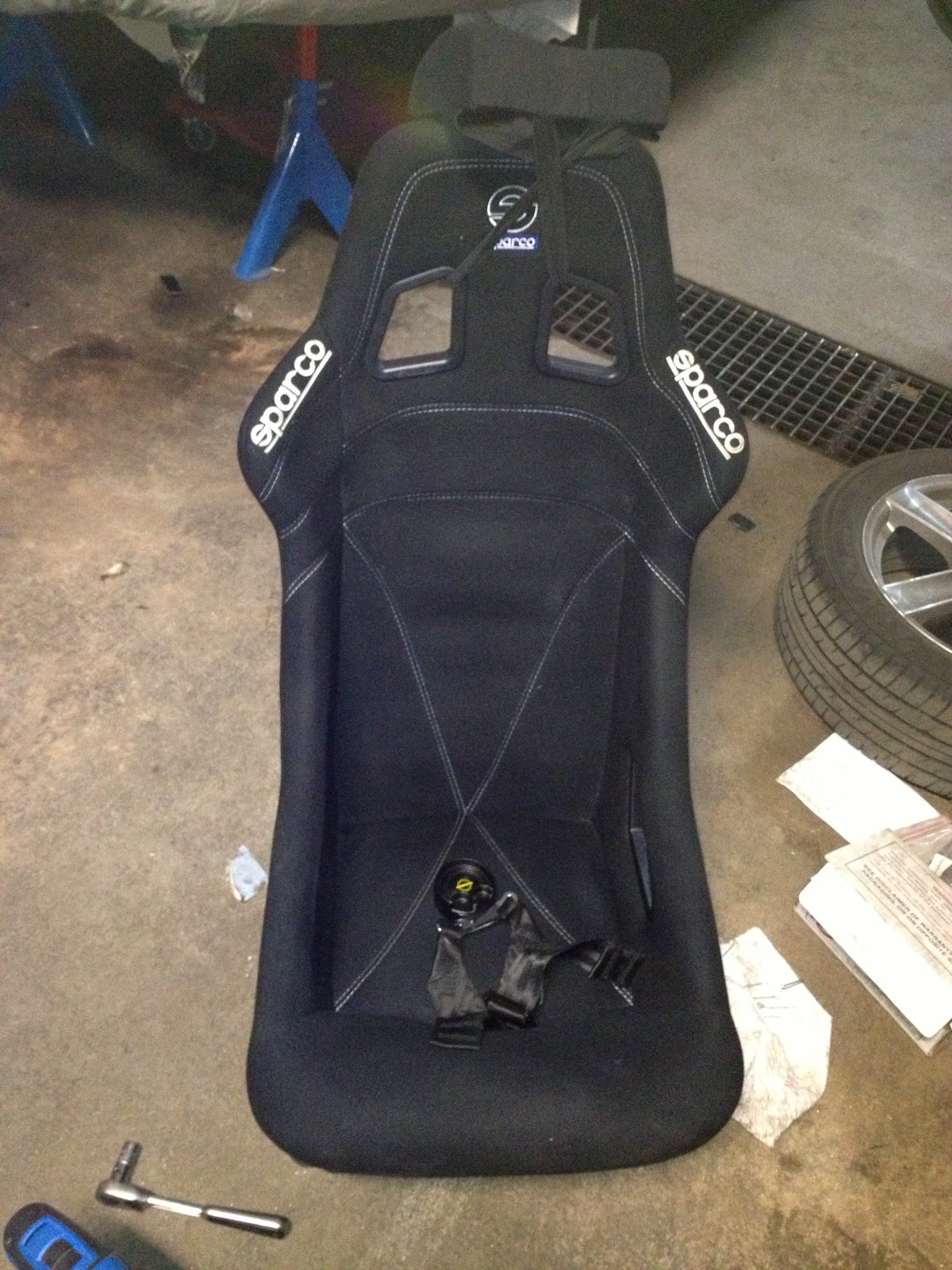 The lap belts are mounted in the stock left sill mounting point and on the tunnel with a Sparco backing plate (no pics). Stock belt is fully functional.

The shoulder belts are mounted to the HardDog M3 harness bar. I had to make an opening in the plastic cover.  The stock storage box is perfect for stowing away the belts when not in use. 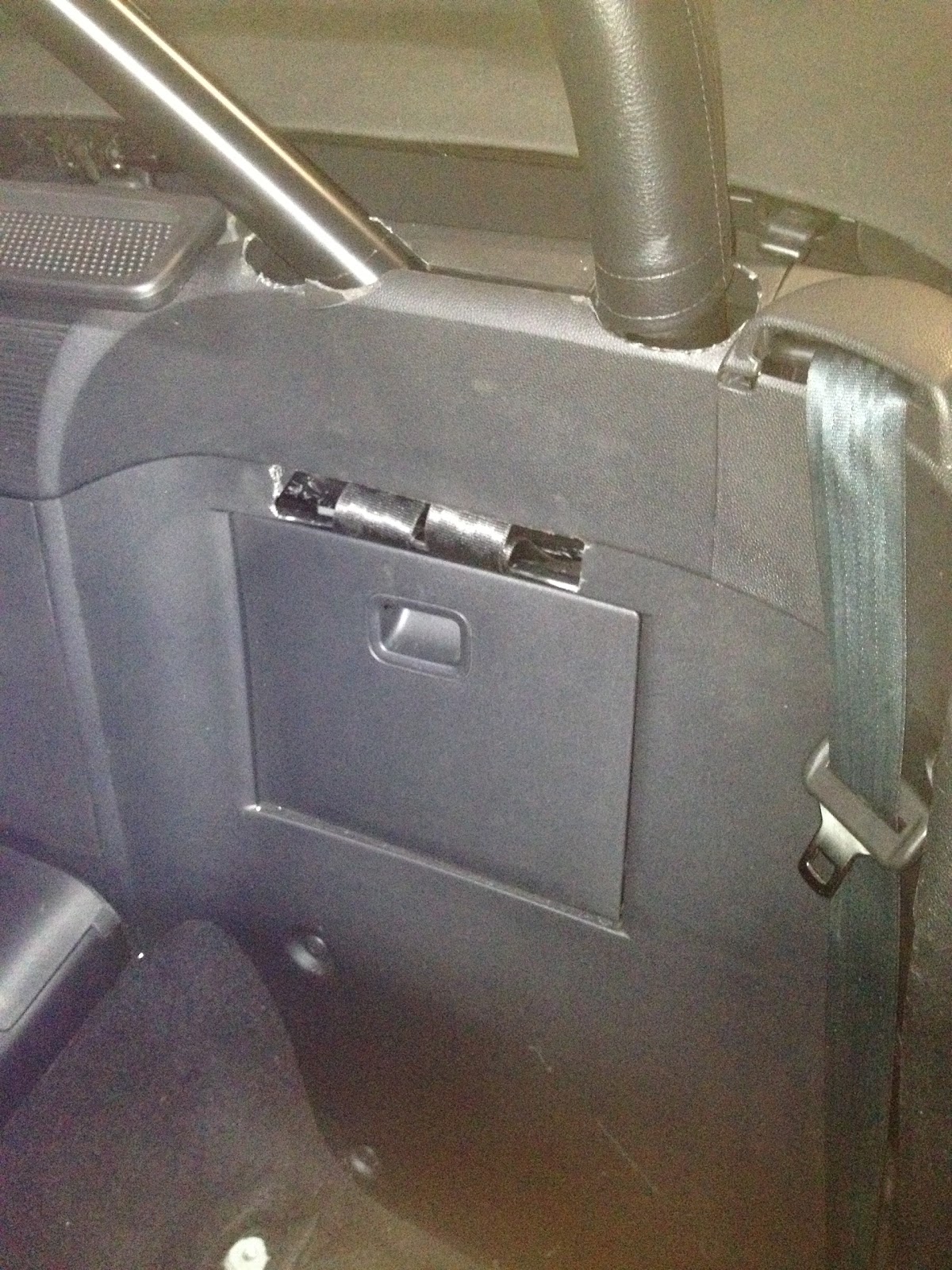 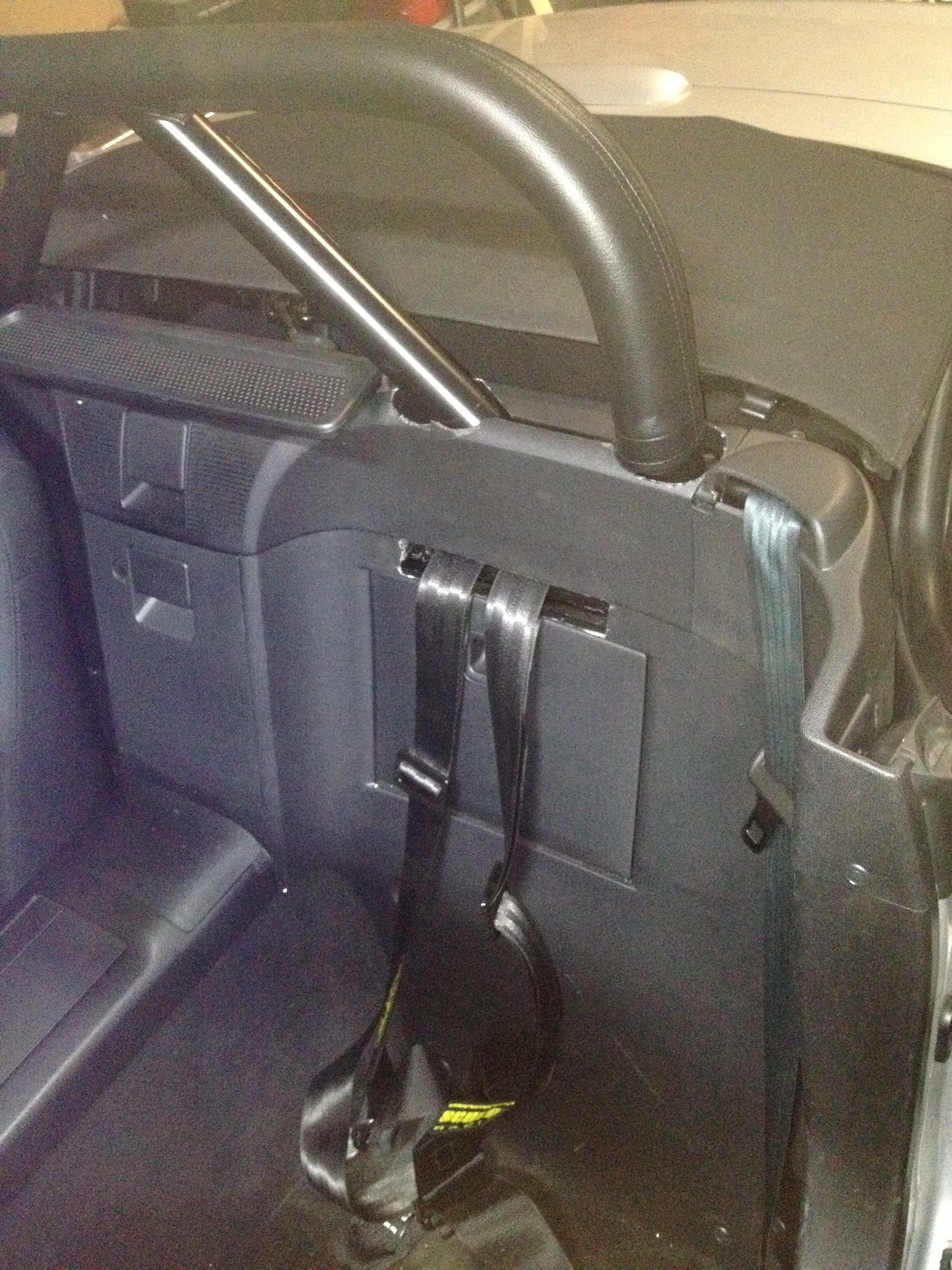 The finished result with a crash test dummy in the car. I would have liked to get lower. The HANS will bush me 1-2 cm further down in the seat but still.  I'm seriously considering having a front section cage mounted but I will need to get hold of a HT first. I also need to fake the signal from the stock seat air bags as the warning in the dash is annoying and non inspection friendly. 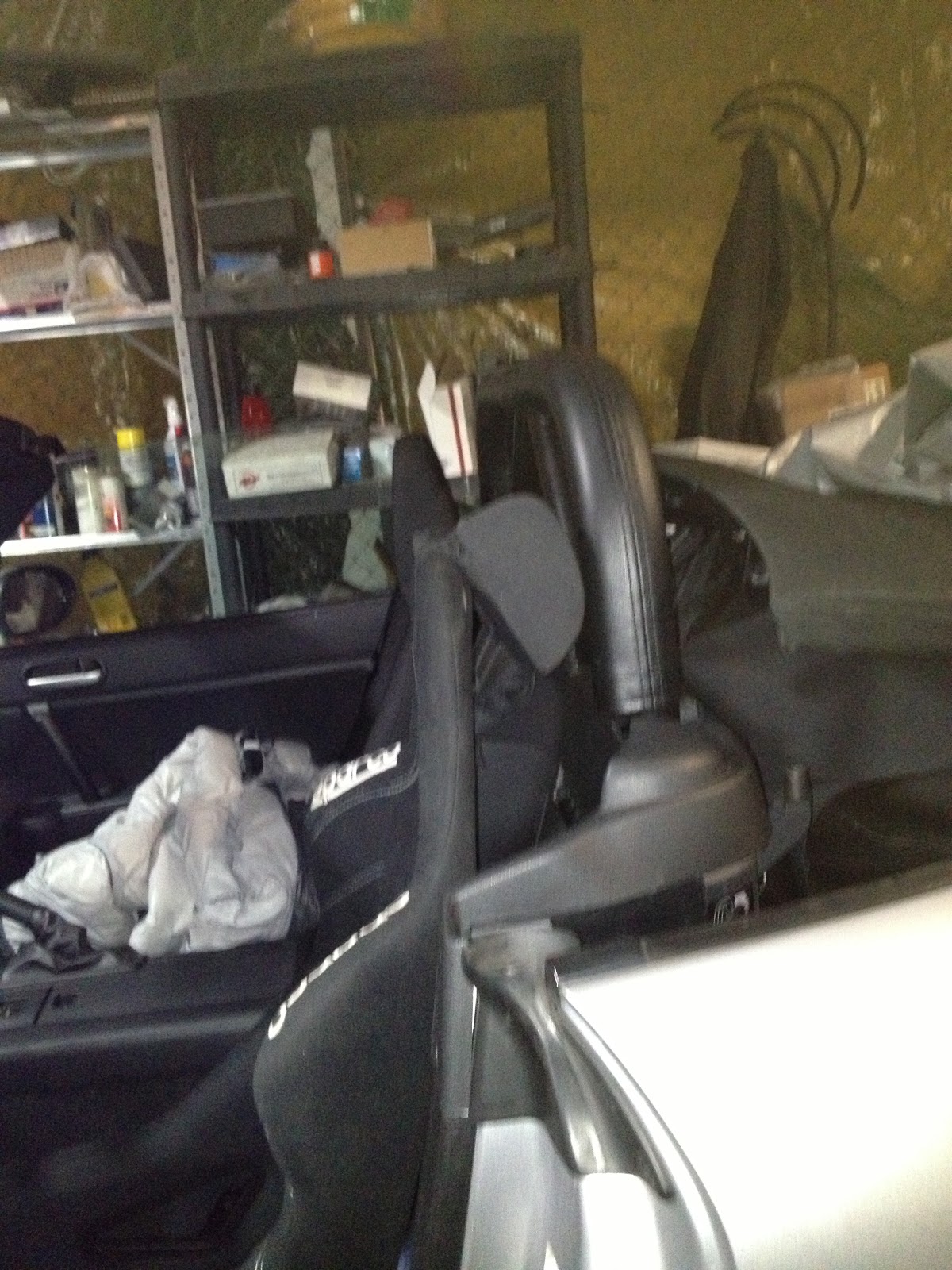 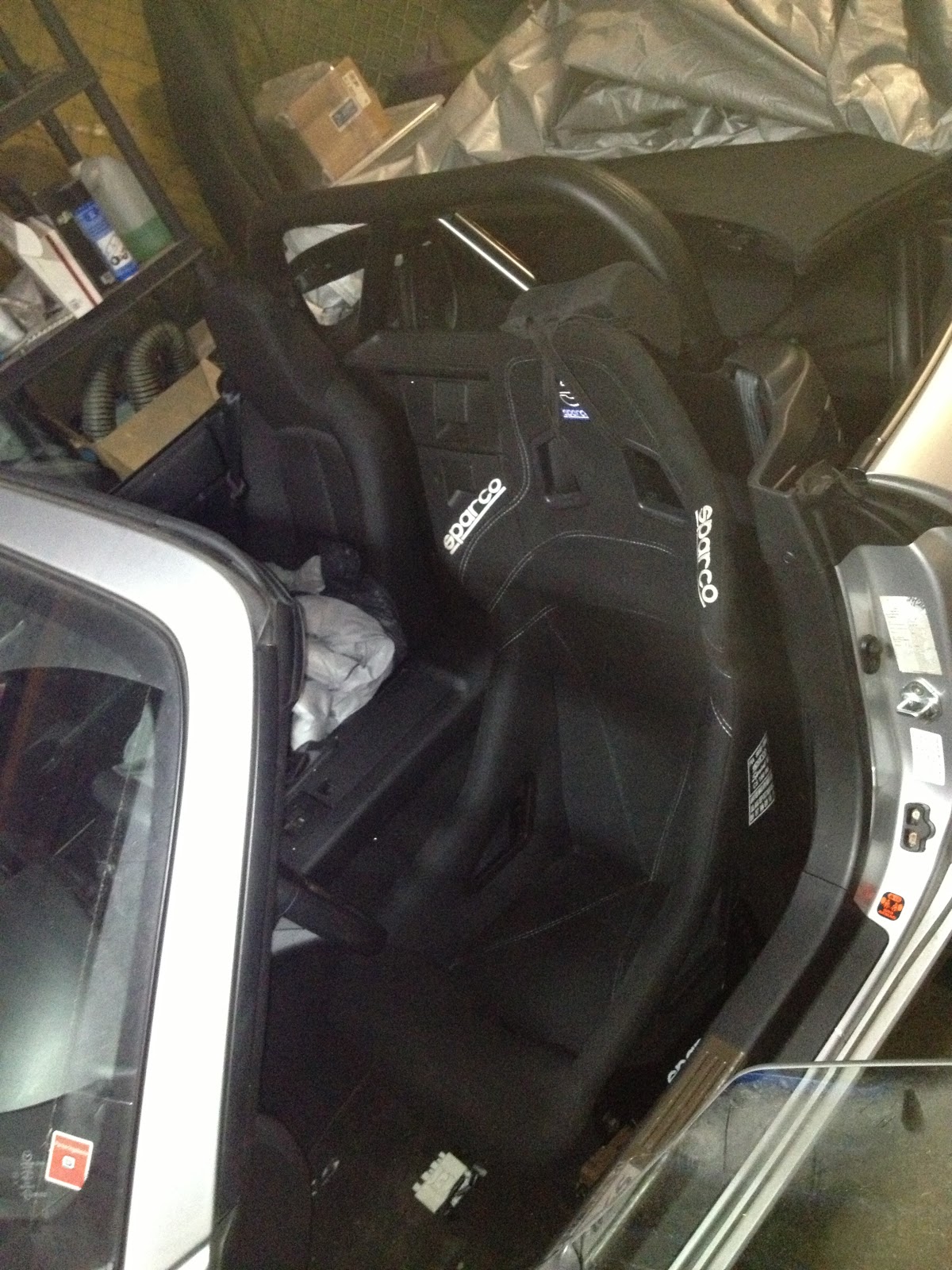 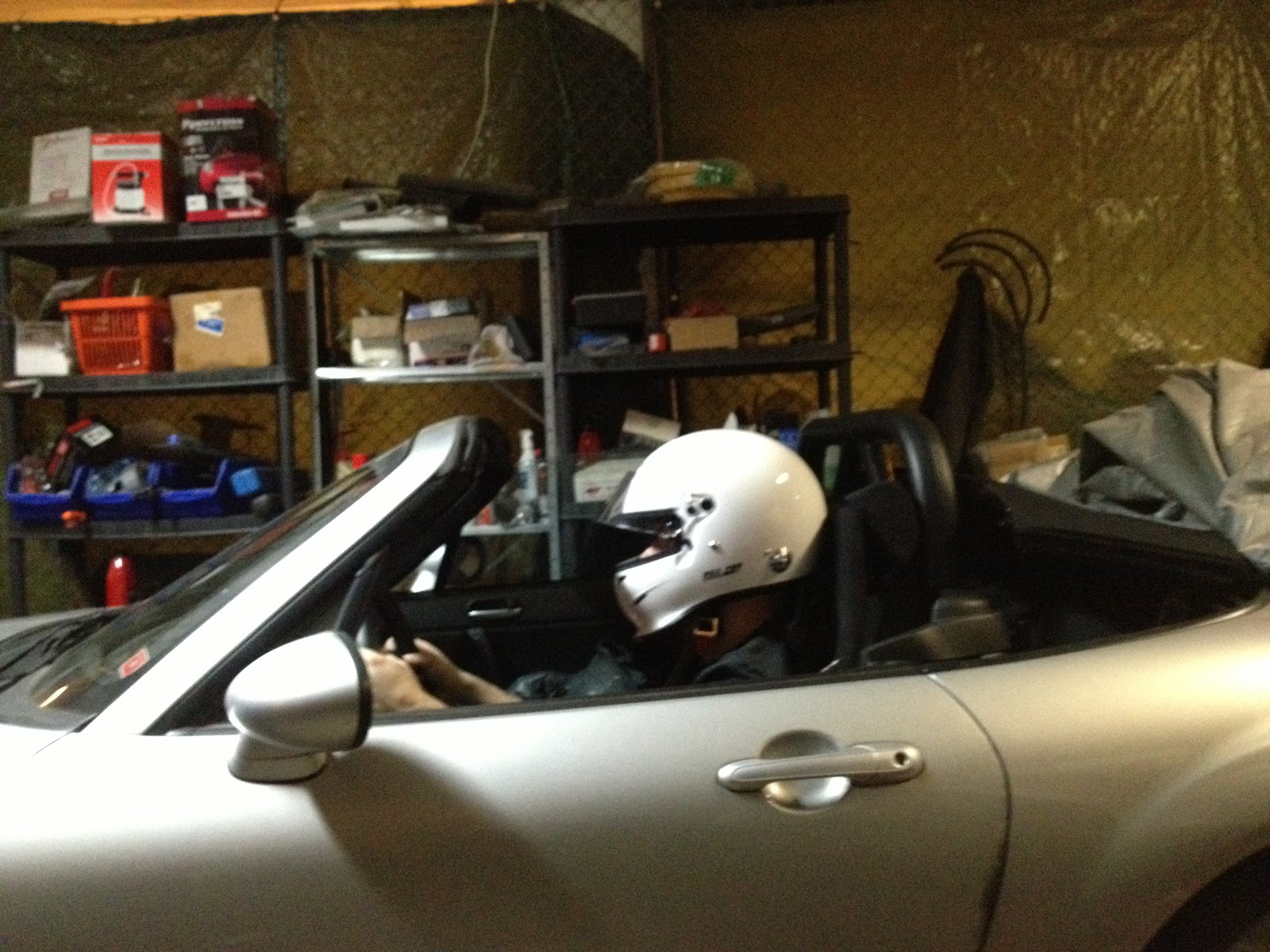 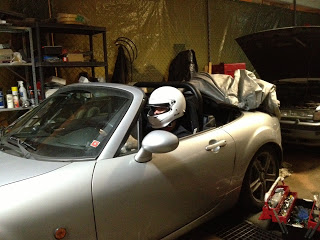 9" wheels and matching 225 R888 was one of the best upgrades I did for the MSM.  They where worth 3 sek on Rudskogen compared to the 205 -17 street tires. I hope to se similar gains with my new setup on the

I removed the stock header on the NC the other day and took some pics of the "squid". On the internetz this piece is considered to be the most restrictive and badly designed part on the whole car. I partly agree but