I did my first two trackdays this season on the 23. april (NSK) and 3. may (Trackday.no)
This was the first time with the new engine.

The first one was more of a brutal tuning session as I had a couple of gremlins in the tune that didn't show up before I pushed it on the track.  I had minor knock around 4900-5100 due to a tad too much timing. This did not only retard the timing by up to 8 degrees in current zone but it also switched to the high det map for the rest of the rev range until I shifted on 6800 rpm. Once I got the timing set to 20 deg instead of 22 I gained a lot of power above 5K.  The other problem which is still not solved is that it goes ultra rich above 5K.  It seems ok on the road but once you push it and keep it in the upper rev range on the track it stays at 11.14 all the way. I could be wrong but the 0-5v NTK sensor is probably a Titania based O2 sensor and does not have the same "wide band" as the more common UEGO WBO2 sensors as I have never seen a reading of less than 11.04 regardless of how much fuel the ID1000's were puking out during initial tuning.  My Innovate was showing all the way down to 9:1.

Anyway I bettered my time by 2 seconds on the first trackday including the tuning problems and brake fade.
On the second trackday I had fixed the brakes and a better tune which resulted in a 1:40,44 which is more than 3 seconds better than my previous setup in 2014 !!  I know that this car now is capable of a sub 1:40 @ Rudskogen.  The biggest problem now is the open differential as the inner wheel spins out of every corner. Thanks to the linear power delivery of the SC it's controllable but there is a lot of time wasted waiting for the inner wheel to get enough tracktion to floor it.  I actually had to change my driving habits to a more wider entry and the point and shoot out of the corners.
The other limiting factor is the brakes. Ducting fixed the fade but they are simply not up to the task of stopping the car.  A LSD will fix the corner exit but I need better brakes to fix corner entry. Power is plentiful and not a lmiting factor at the moment. 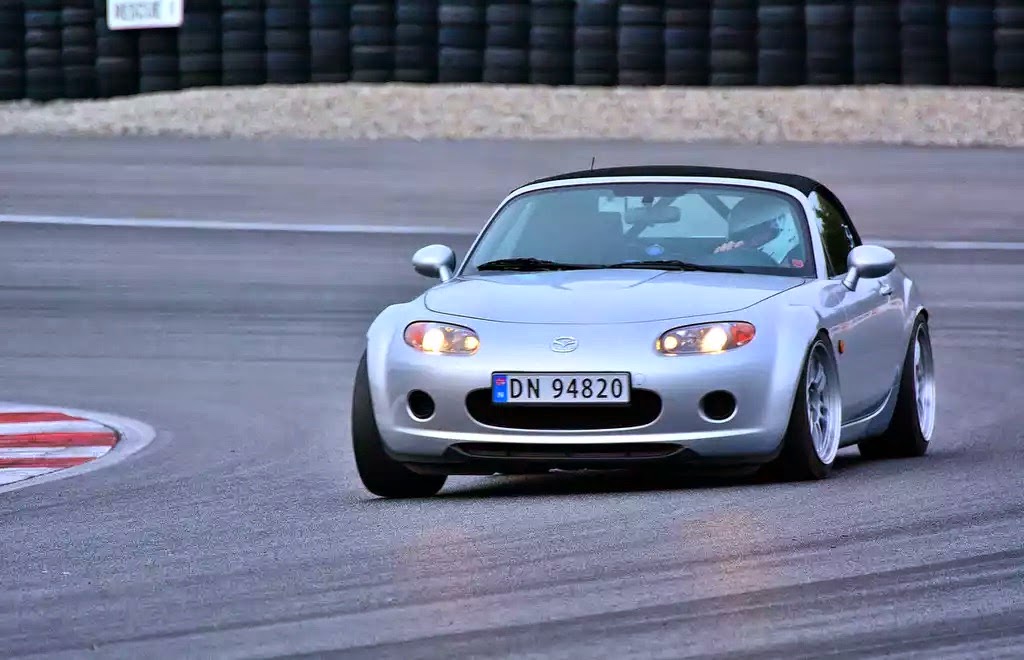 Here is a super crappy movie of the 1:40,44 lap.  The lens on the iPhone is loose inside the casing + I positioned the phone the wrong way filming positioning the lens too high focusing on the wind screen..

I had a go at measuring horse power and torque today using Virtual Dyno and the Dyno function in the MazdaEdit LogViewer. Both are based on the same method; measuring the time it takes to accelerate between RPM points and then calculate hp and

I bought a brake ducting kit from gw ages ago but never installed it due to the reservoirs on the KW3 suspension interfering with the inlet of the ducts.  After experiencing serious brake fade on the first track day this year I wanted to