The piston failure on cyl #1 caused a lot of carbon buildup in the ports and on the valve/pocket.  To verify that the head was still in shape I delivered it to an engine builder that also do head porting and flow testing.
While the head was off for the winter I also wanted him to do some minor porting to improve flow but nothing radical.
From the shop: 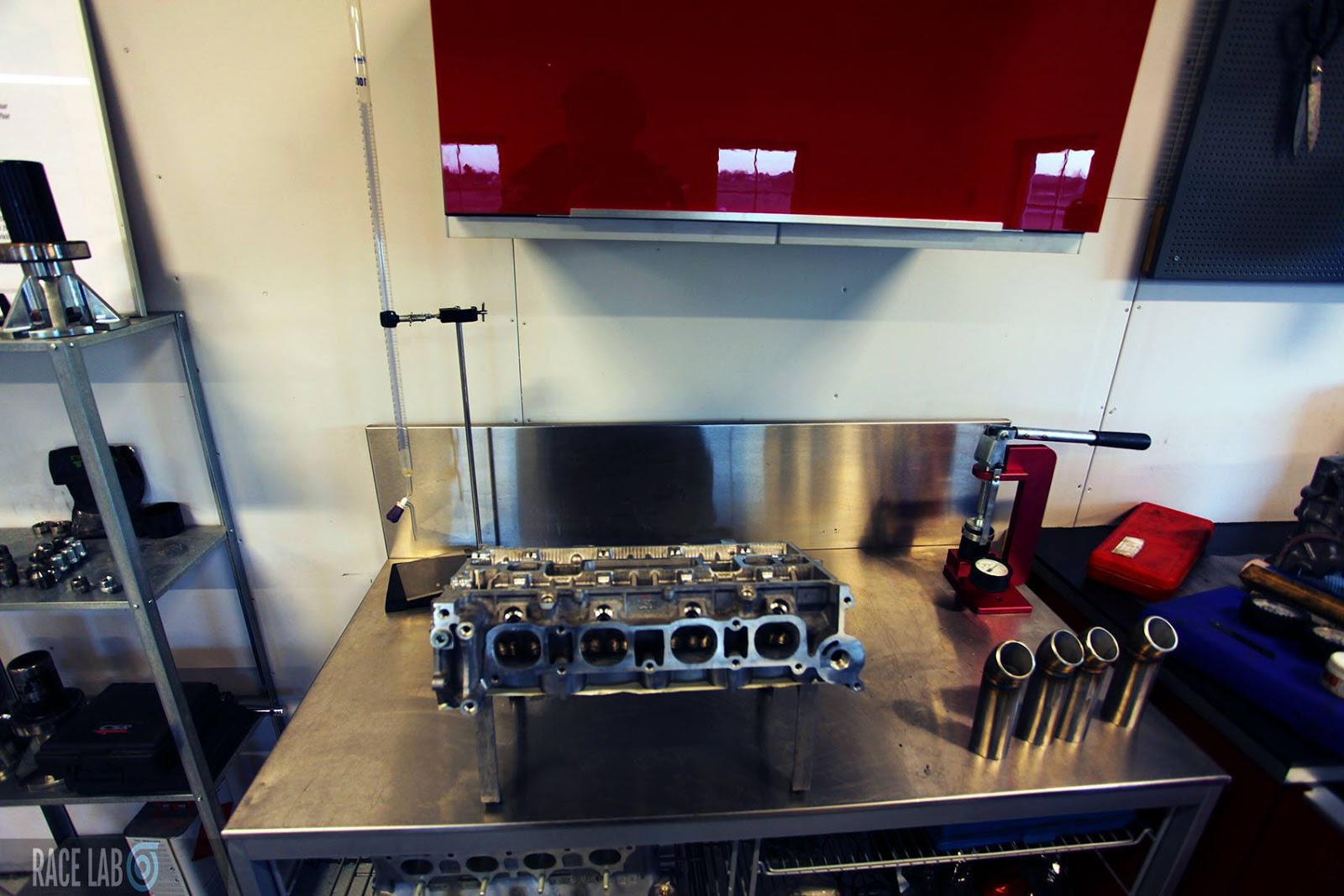 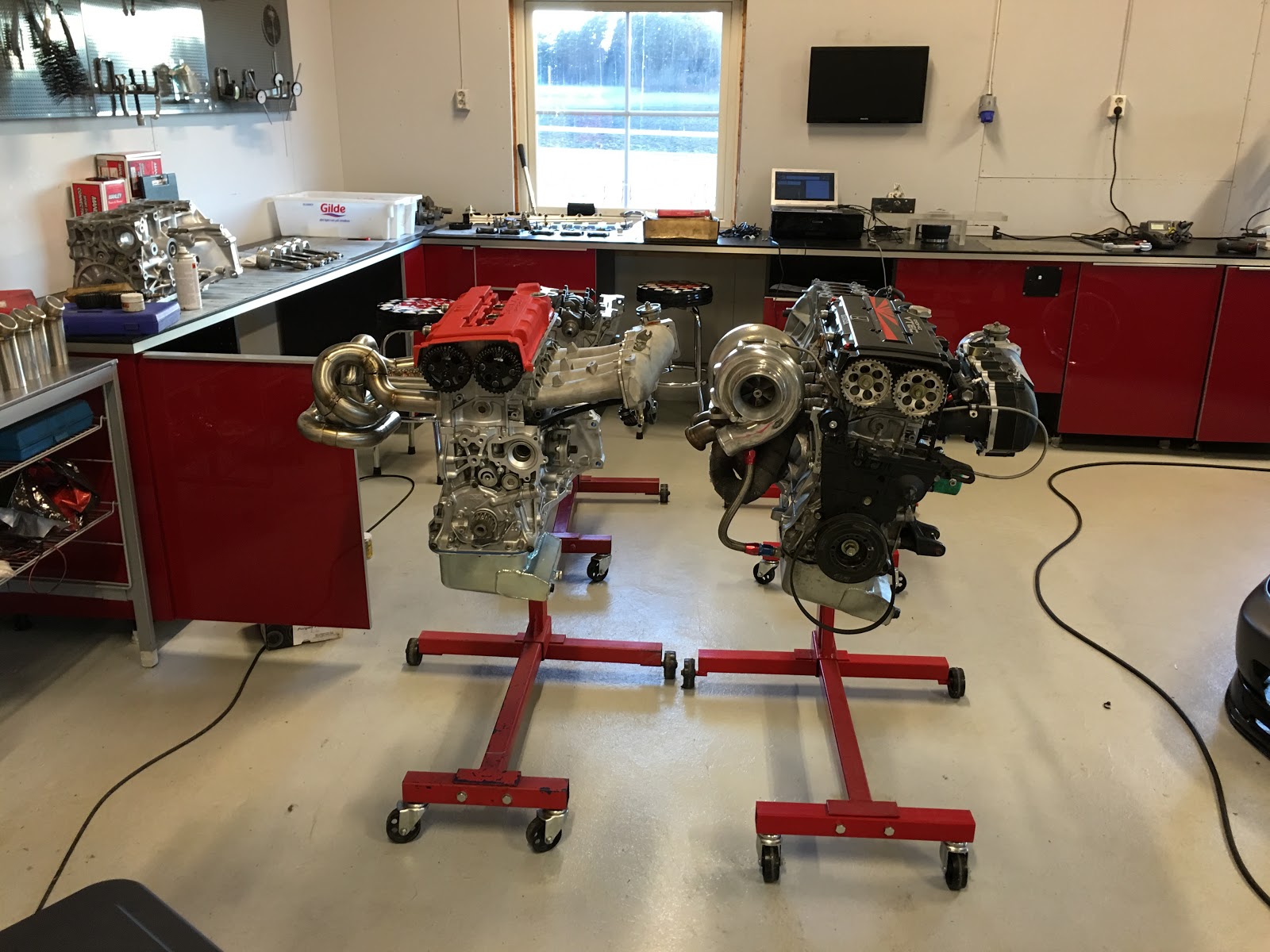 To save some cash I disassembled and cleaned the head myself.  Nice way to fully understand how the head works and what the different parts do. 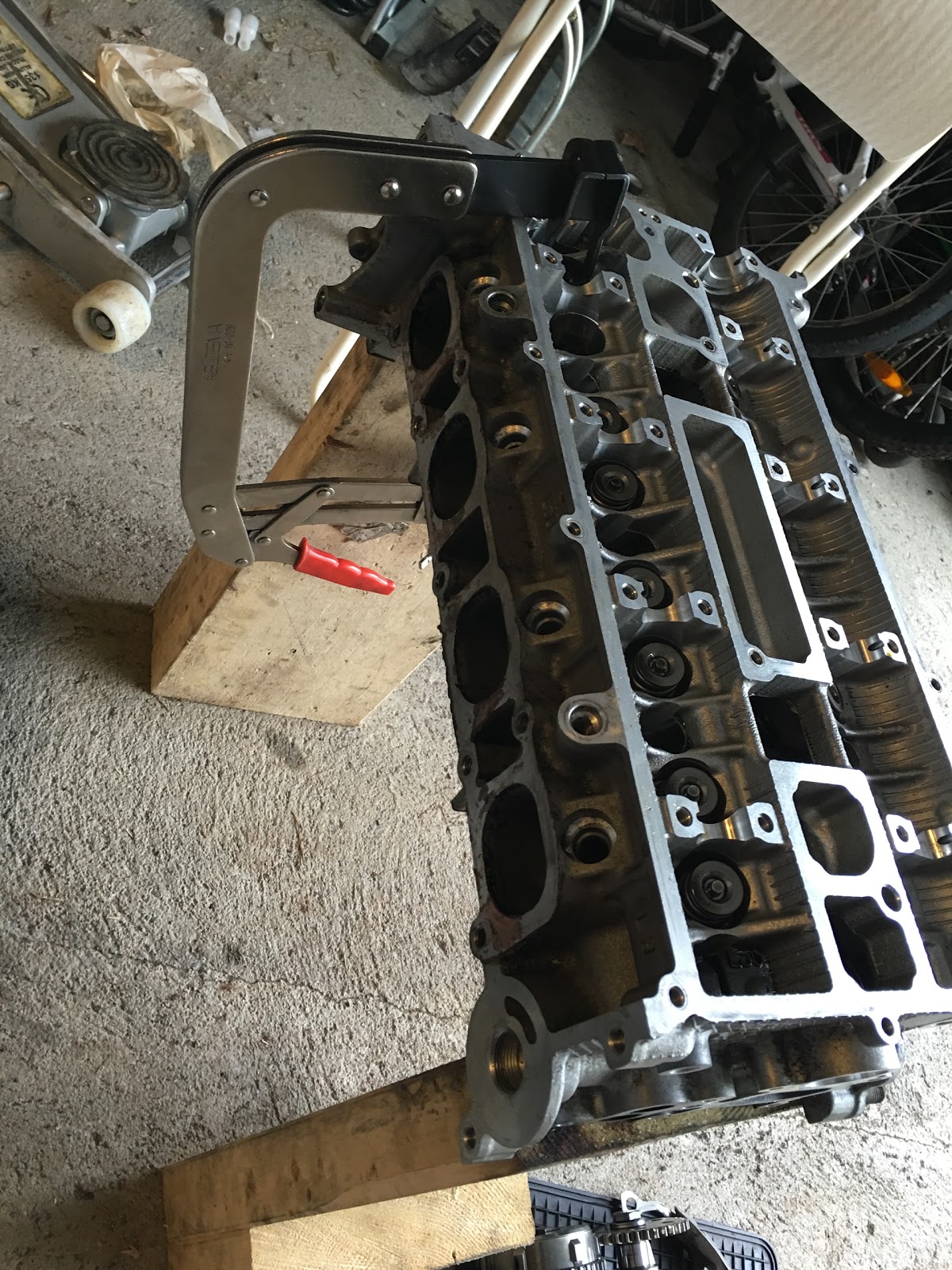 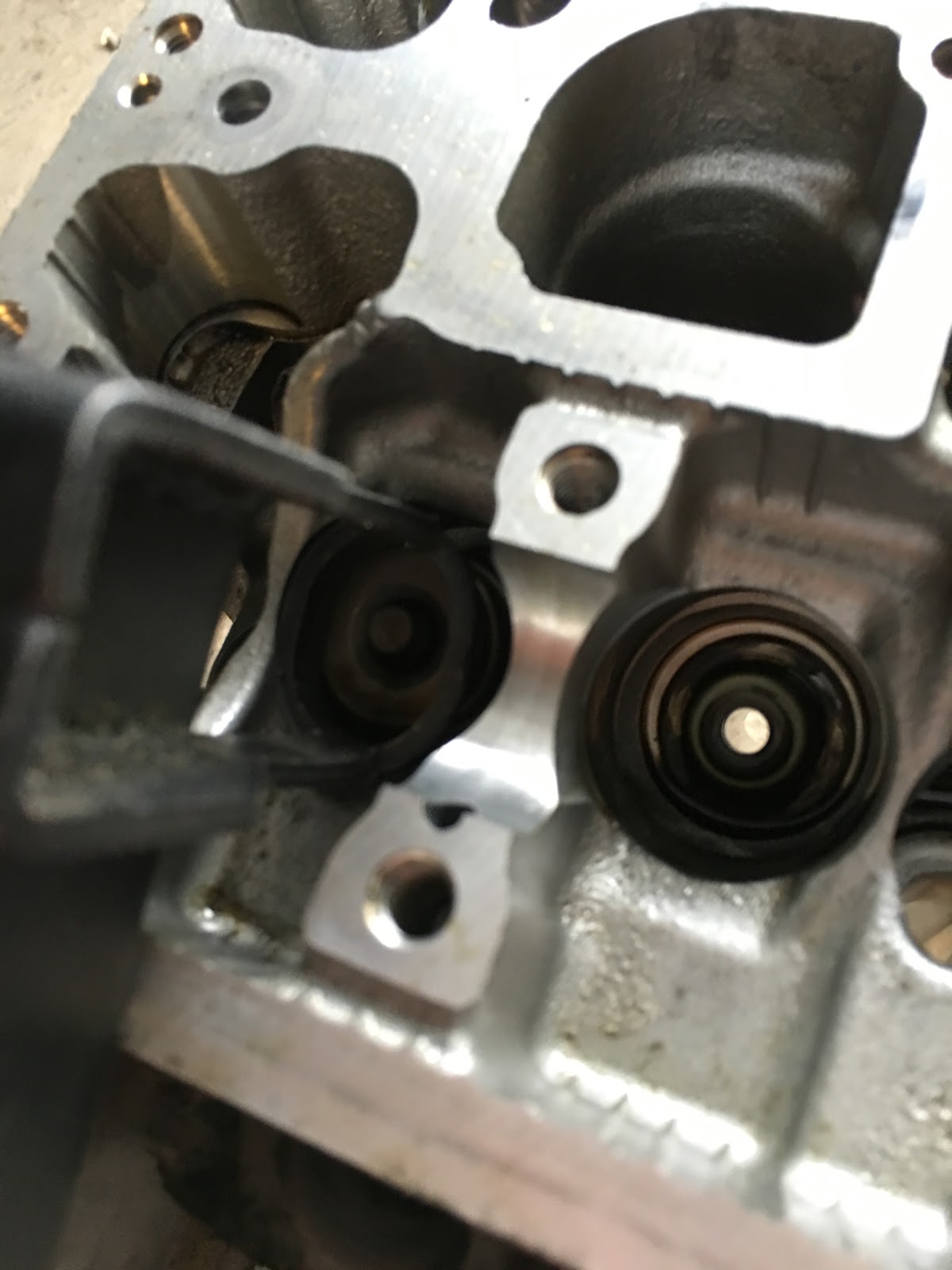 I found a nice double sided parts box on Biltema to keep the parts separated. 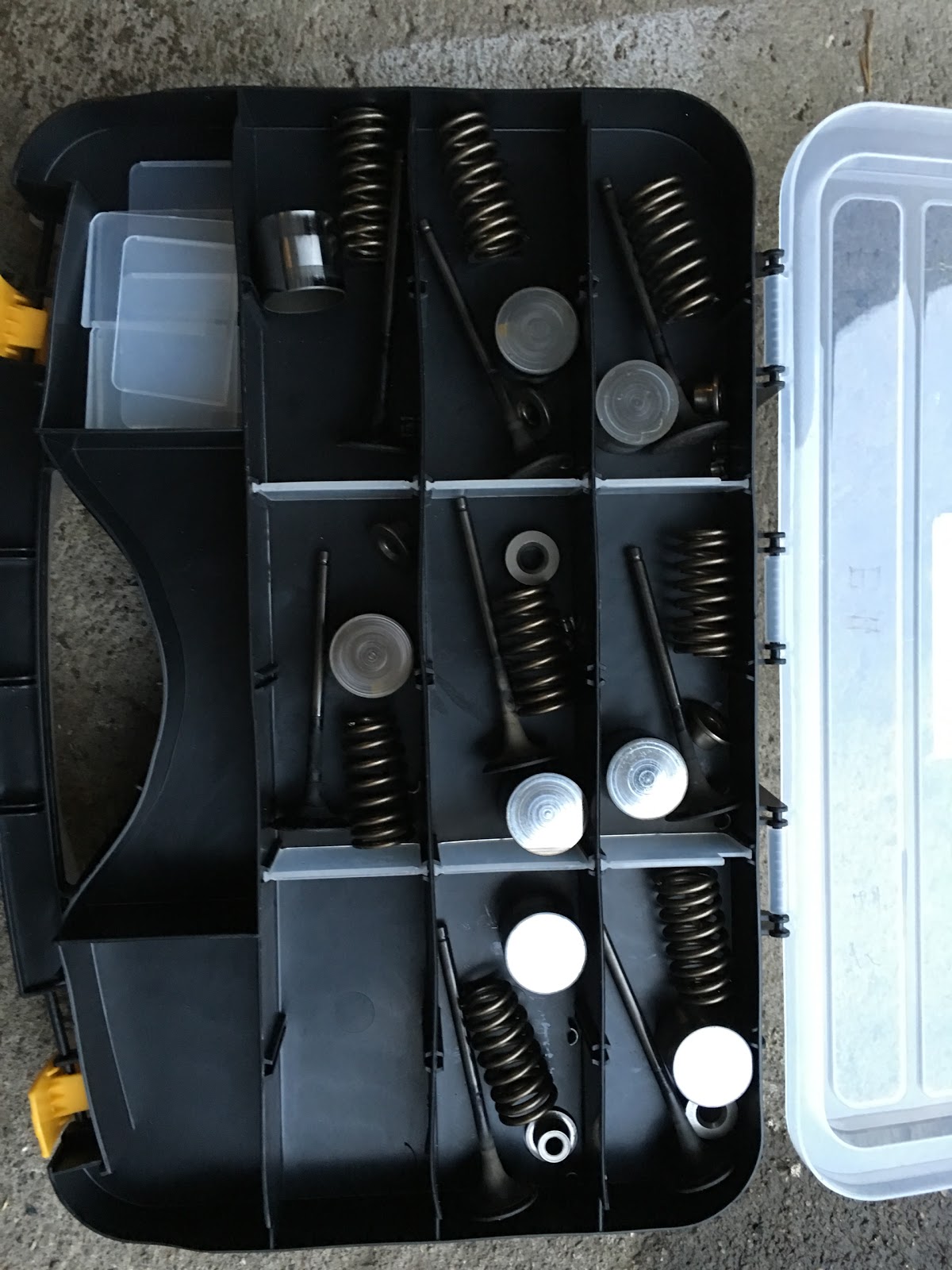 I actually did the last part of the cleaning using the shower with a leftover floor mat as protection.  Girlfriend not informed 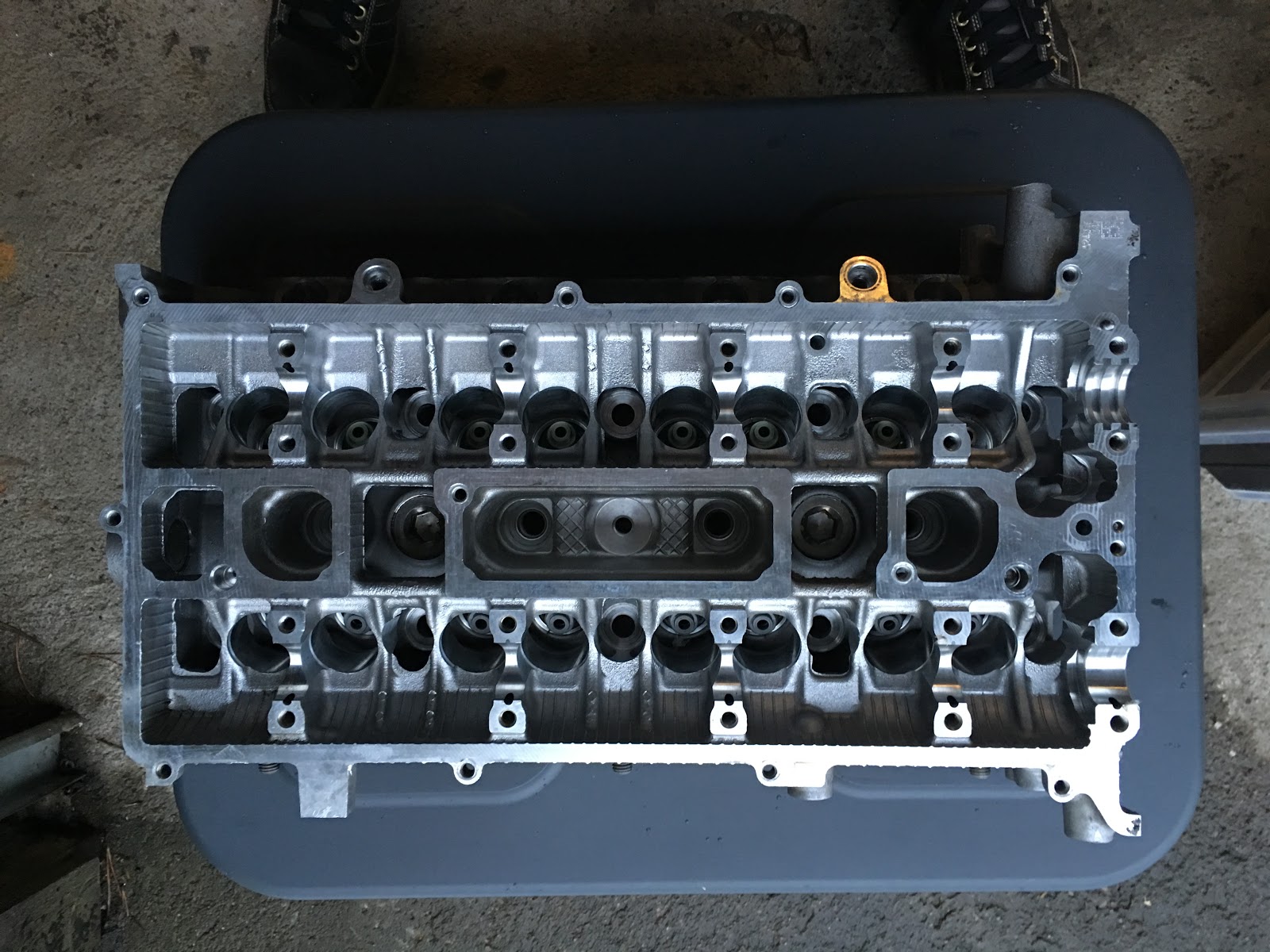 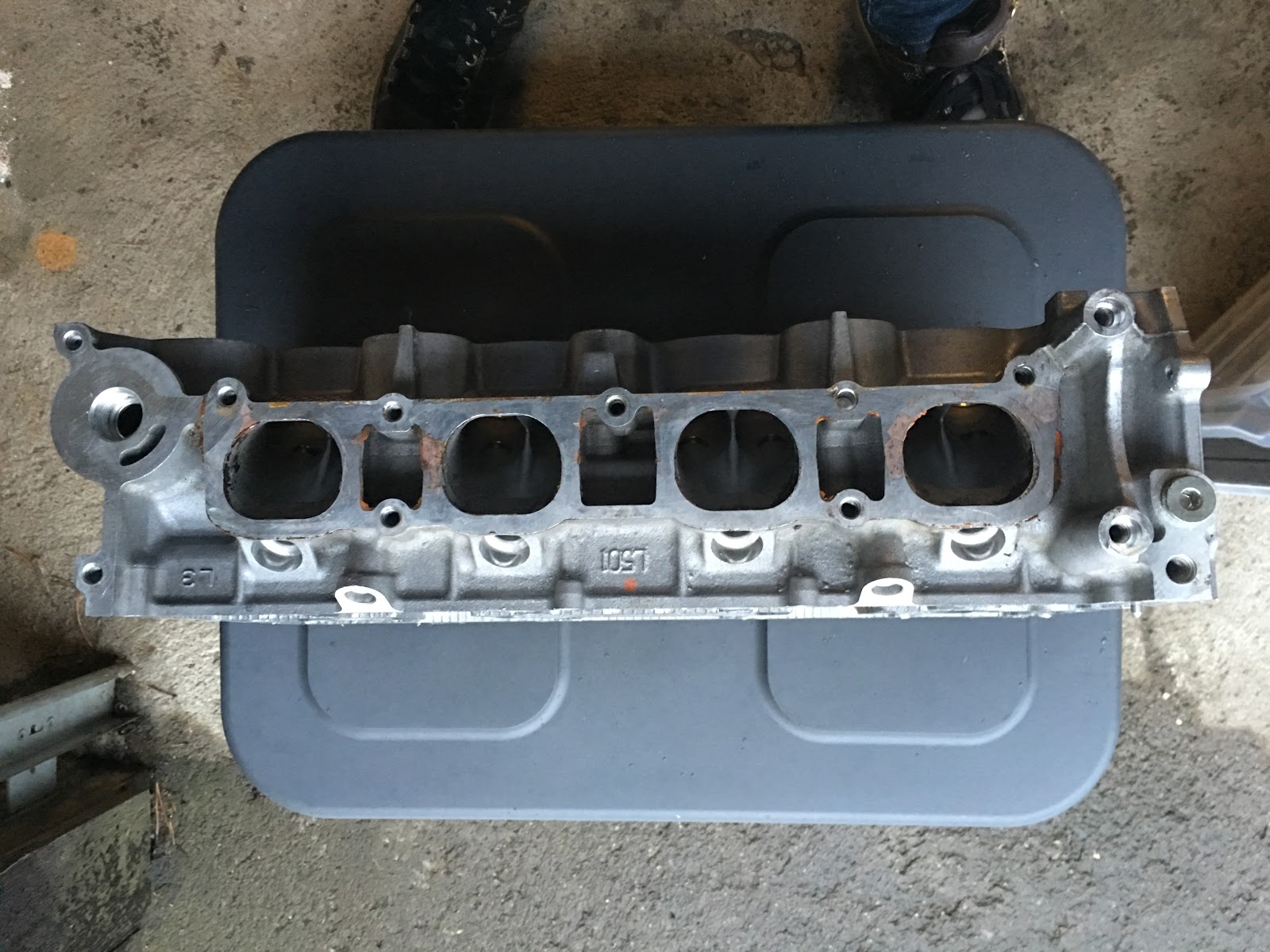 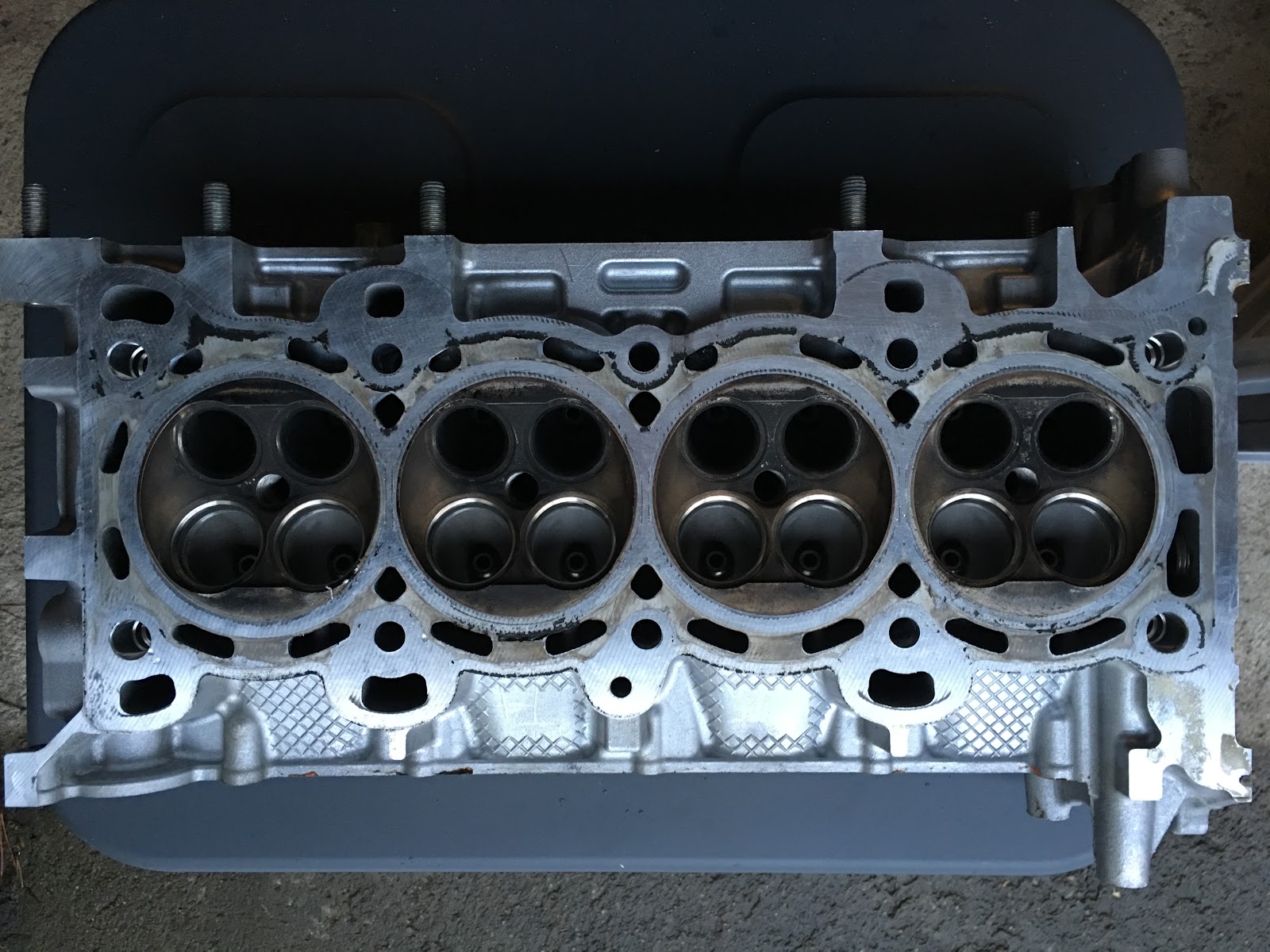 This is when I discovered that the detonation had also did some damage to the edge of the combustion chambers on two of the cylinders: 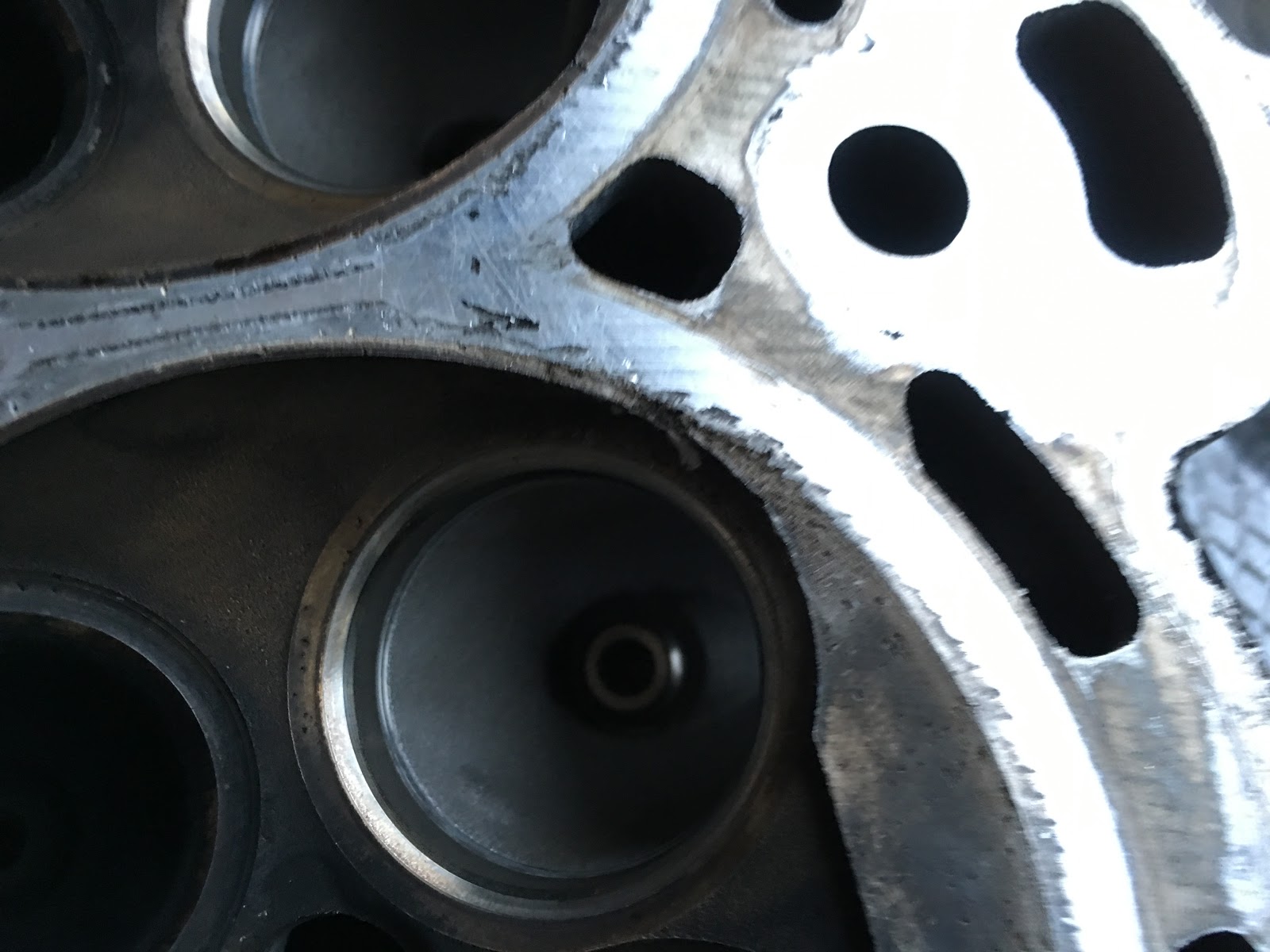 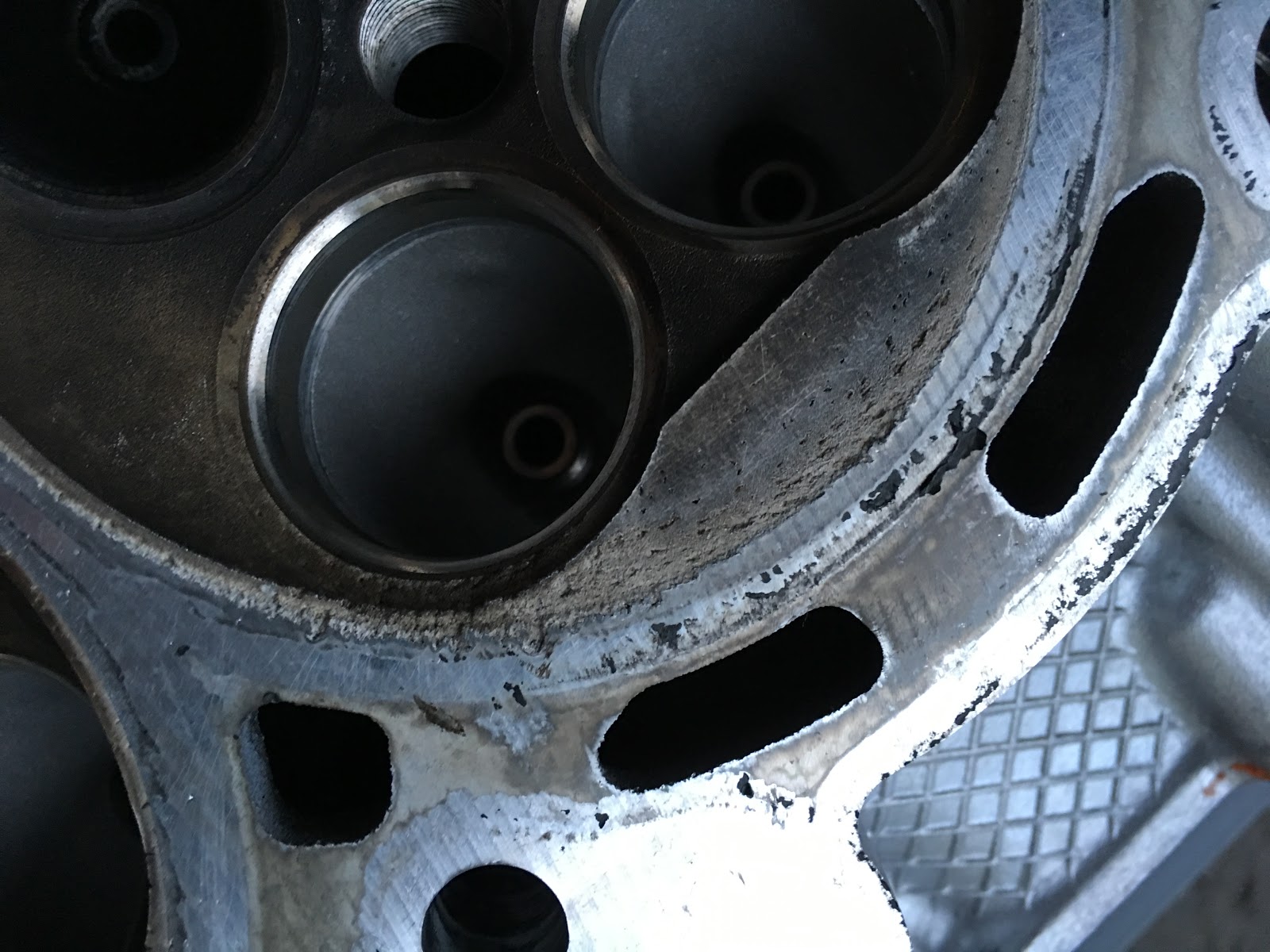 After consulting the builder he recommended shaving the head to fix the damage which means increased CR.  The end result was 0.9 mm taken off which is quite a lot. Since I was going 10:1 pistons I quickly changed my order to Wiseco 9.5:1 instead.  I haven't done the math but it could end up with 10-10.5-CR which I guess is ok.  I just hope the valve clearance is ok or I have just thrown a load of money into nothing.

But back to porting.
The initial flow test and port design showed that removing more material would not do a lot to the flow.  So we went for a bit more extreme approach that actually involves reducing the port size by remolding the lower shape of the port using a special epoxy. Increased air speed and other magic will happen.  I'll make a separate post on why I think this might be a good idea.

Pics of the almost finished head: 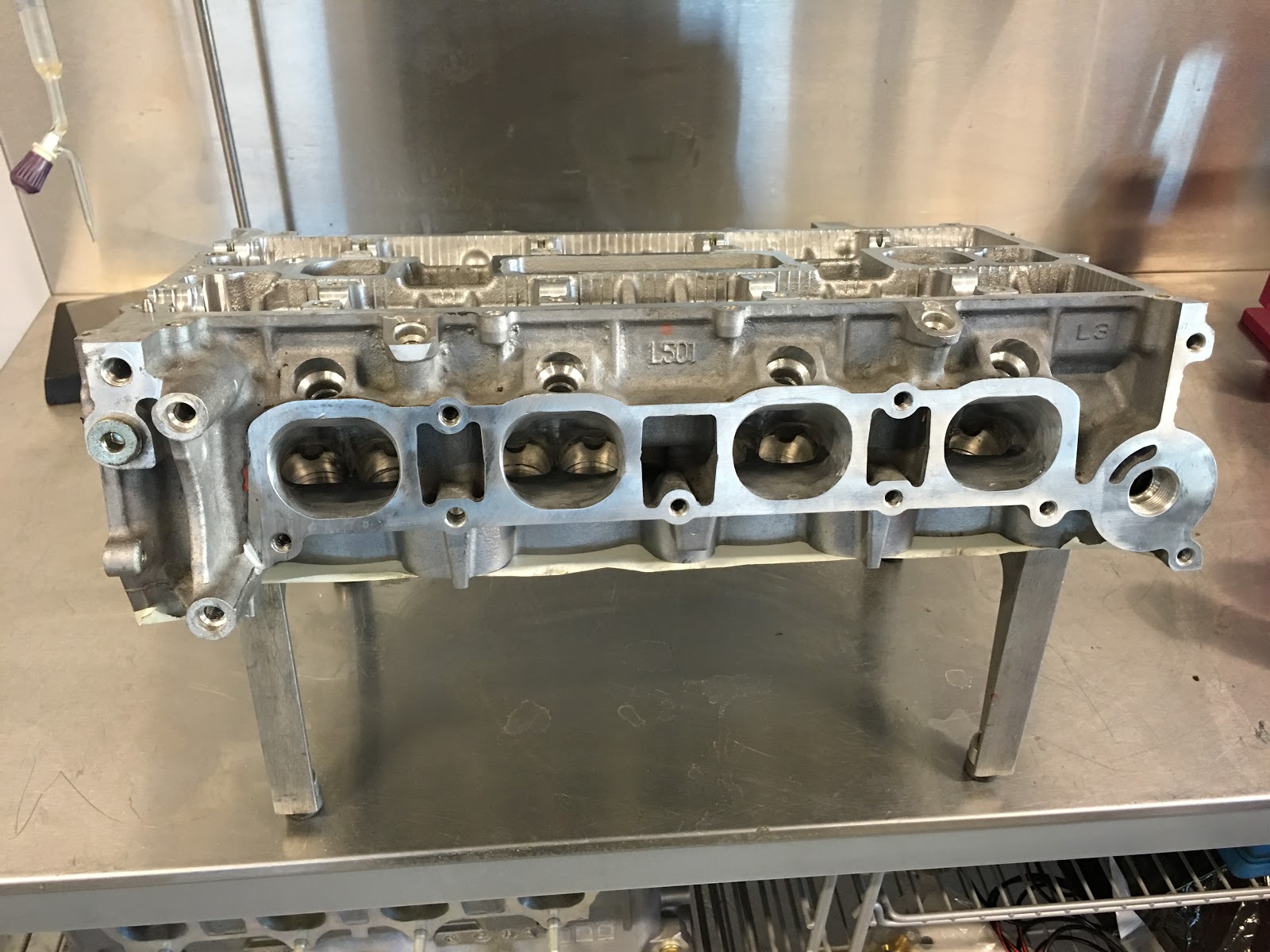 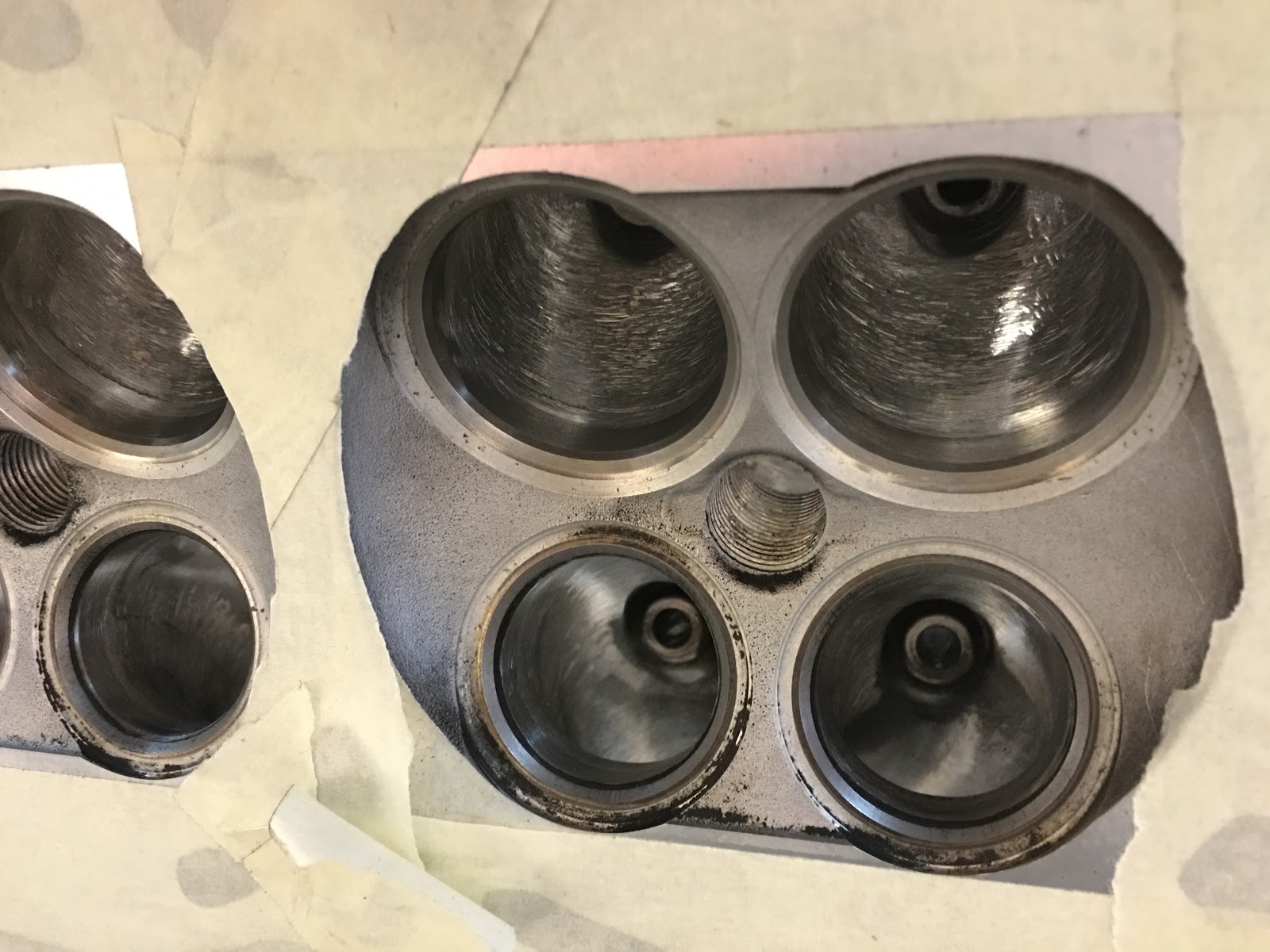 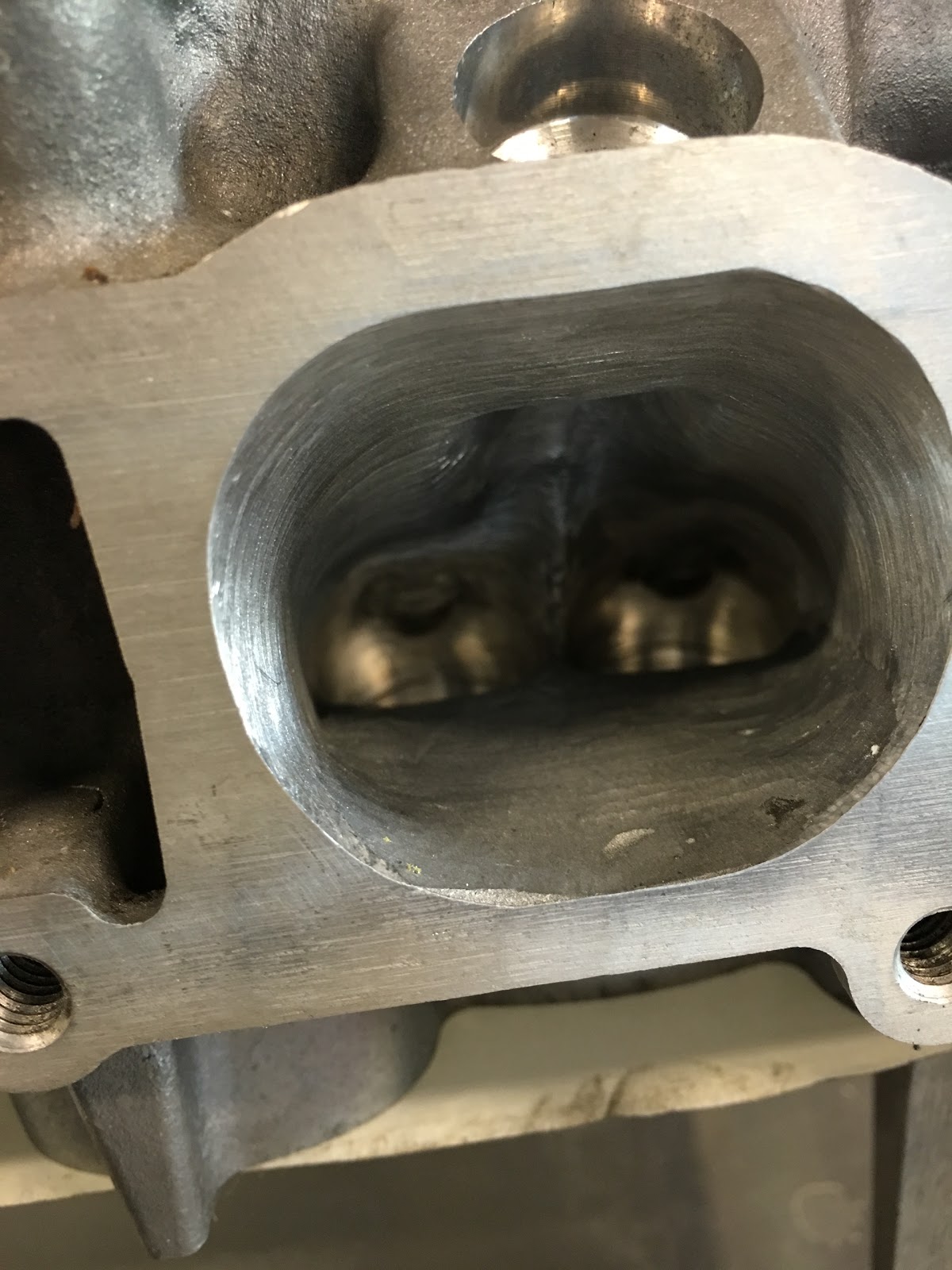 Exhaust is just cleaned up. The surface looks kind of rough. 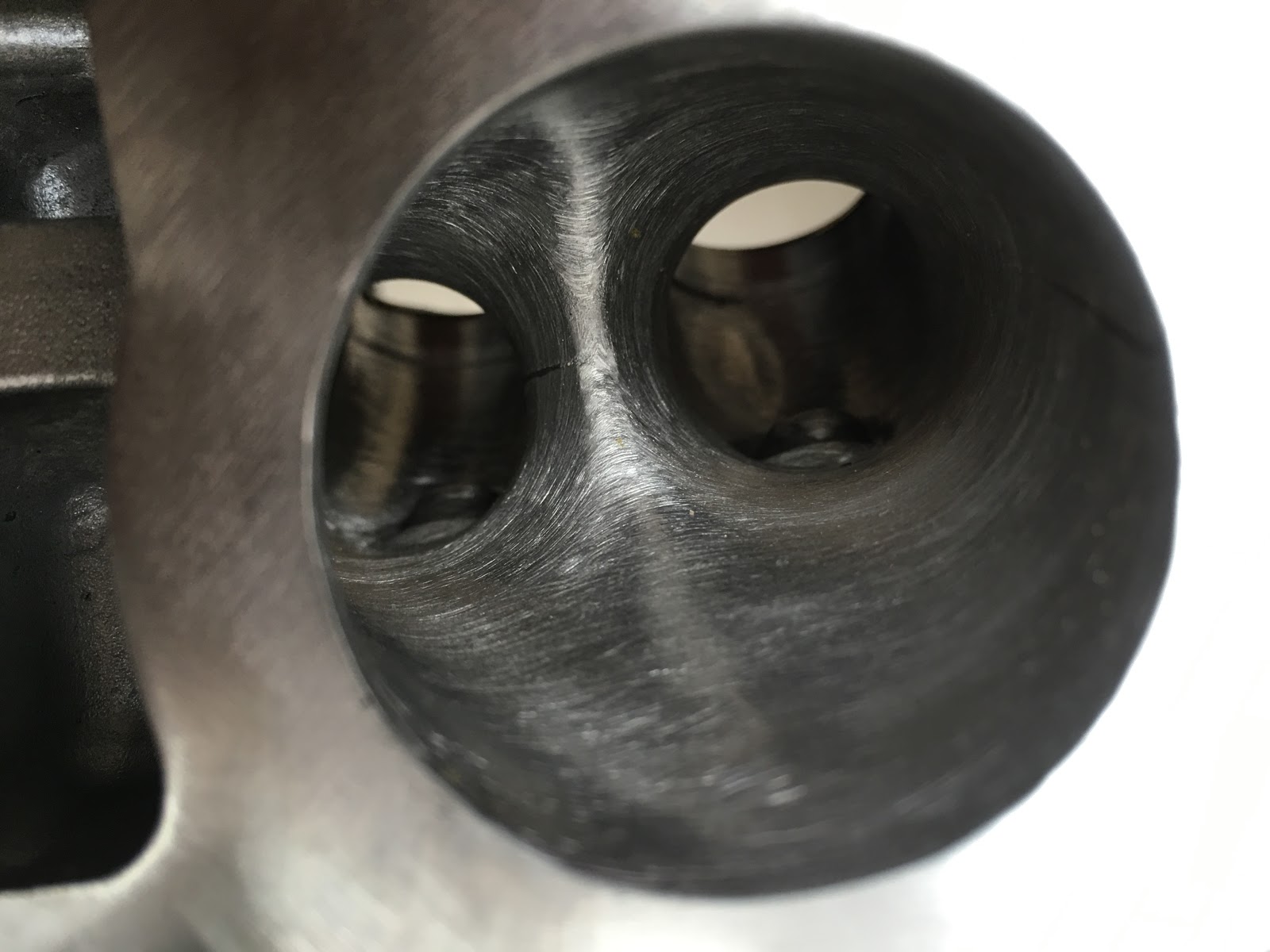 I will do the valve lapping in the seats myself to get a perfect fit.  They looked to be very good when delivered but it is required after porting due to the grinding work, dust etc. I would have expected this to be done already but I don't mind. 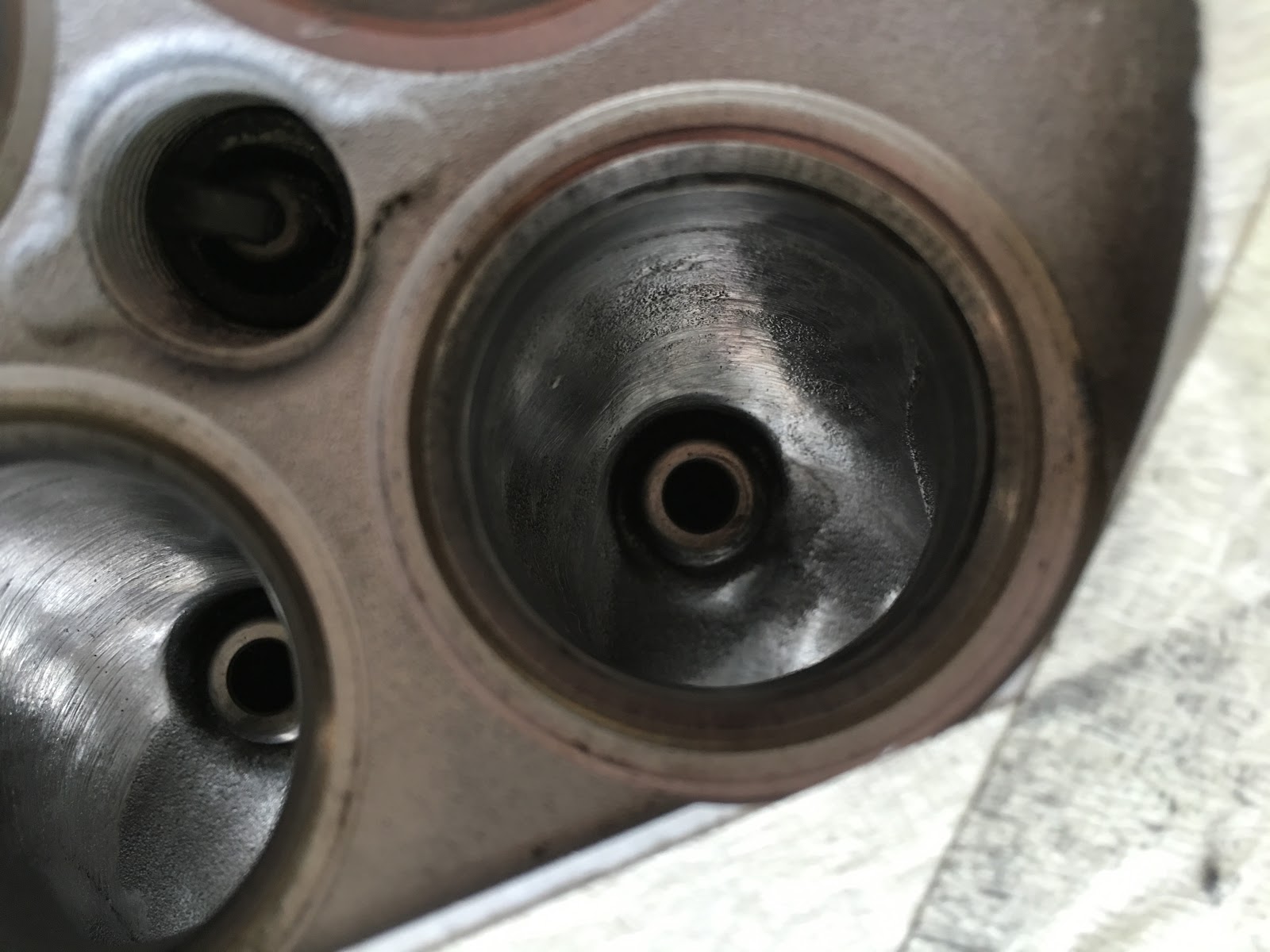 Before and after results:


Picture is straight from the flow bench when I picked it up. 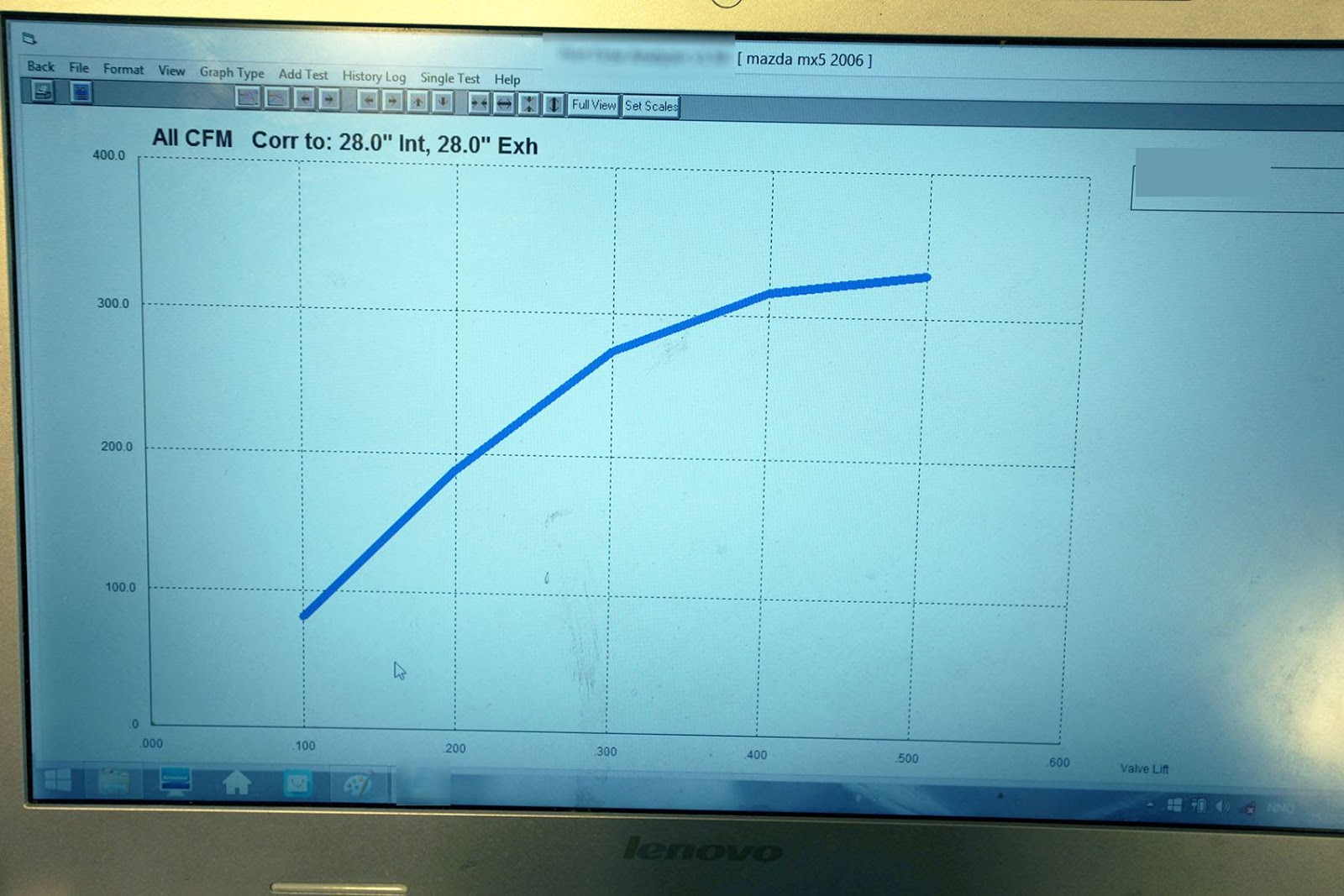 I added the stock data for a comparison. 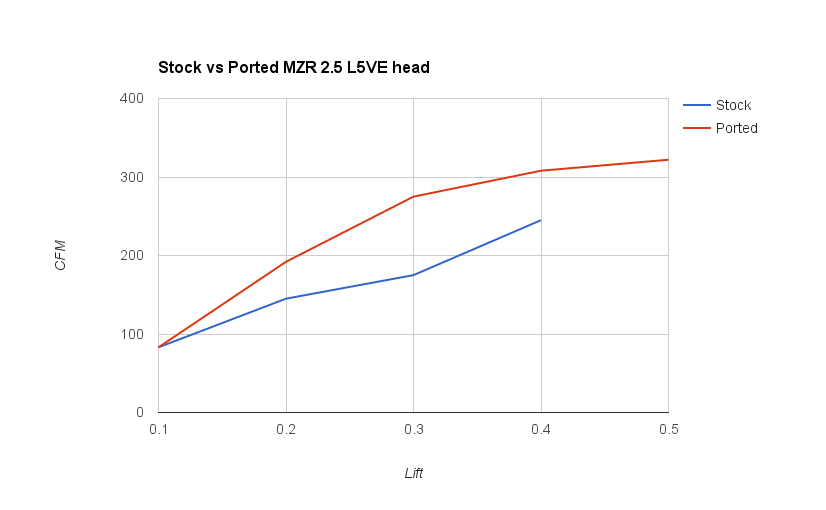 The measurement for 0.5" lift on stock port didn't happen due to initial problems with mounting the actuator controlling the lift.
As my current 2.0 intake cam has a gross lift of 9.4mm / 0.37"  and my planned Cosworth cam has 9.9mm / 0.39" the CFM increase up to 0.4" is of interest.  This could be fun.
I'll verify the results using VD and comparing my results for 2015.  The increased CR will hopefully add some GO as well.

My cylinder head needed some TLC after the port job as some of the seats had some minor scratches after the grinding, and I'm pretty sure some of the valves was misplaced according to which port they sat in originally. I followed this guide

The MX-5 NC cooling system can be a bit hard to fully understand unless you have had the engine out.  Lots of hoses going everywhere and some important parts are hidden in the crowded engine bay. I didn't find a diagram in the FSM