Comparing different turbos for the MSM

The OEM turbo is a dead end if serious power is the goal.
Serious power in Miata terms is 300+, about what a Supra or Skyline delivers with an open intake and som fancy branded socks on the brake reservoar.

The stock MSM turbo might be able to push out 240 whp if everything else is optimal. That means new IC piping. 3" from the turbo, removed VTCS from intake manifold, CAI intake, perfect tune and 15+ psi.
Another option is to have Dead bolt or Blouche prep the OEM unit with a new compressor wheel and some other tricks. That might get you to 250-260 for the same money as a T2560.
At this point the reliability is none and the tiny turbine is creating a huge back pressure heating up the valves and messing up the combustion.

Since OEM manifold is only compatible with the OEM turbo and looks to be designed for packaging rather than flow the next step is quite expensive.
New manifold, turbo, dp, IC plumbing, intake.
My ultimate goal is to touch 400 whp. Not this year though.. Internals have to wait until winter 2010. For that reason I have to run my new 400 whp capable turbo at low boost and probably outside it's compressors optimal efficiency area to prevent my stock rods from leaving its current habitat. I'll aim for close to 300 hp and make sure that the torque in the mid range wont exceed some magical maximum number that will destroy OEM rods.
I have been looking into different alternatives and have decided that a t25/28 type turbo is not worth it. The 2560 would be near optimal for a stock bottomend but I can't afford to swap turbos every year. Besides, a bigger turbine will make 300 whp with less backpressure and temps on the exhaust side.
I have looked at different options and are now considering the GT3071R or the GT3076R with the larger compressor.

Both Begi and FM delivers a kit with the 3071.
FM however uses a T25 flanged version of the 3071 . I guess they do this instead of producing a T3 flanged manifold. I'm not sure of what turbine A/R they use. Probably 0.63.
I suspect BEGI delivers whatever you want.
The initial plan was to use the BEGI manifold with a turbo from ATP.
While researching I read some interesting posts on miata.net from a guy called eliminator77. He has tried the BEGI, FM and ETD tubular manifold in a high HP setup (500+ hp). Based on several dyno runs the ETD manifold made a lot more HP and is part of the setup he uses today that has made nearly 600 whp. Thats way more than what I am aiming for but the ETD pice clearly has a more effective design than the cast manifolds. Hopefully also for lower boost pressure and cfm. I have not heard of any ETD tubular manifold that has cracked or failed.

Current status is that I have an ETD manifold with external WG flange in the mail.
What I need now is to decide which T3 flanged turbo I will be using.
I have been reading up on turbo compressor maps and turbine sizing lately.
I can recomend Corky Bell's book "Maximum Boost" and A. Graham Bell's "Forced Induction Performance Tuning".
Both books coover turbo selection and sizing but the latter is a bit more hardcore and more focused on competition and racing.
ATPturbo.com has compressor and turbine maps for most garret turbos.
This is where I got all the maps that I'm using for comparison.
To make use of them we need to know the Pressure Ratio and Air flow rate of the engine.
Pressure Ratio = (14.7 * "boost in psi"
Air flow rate (cfm) = ( Engine volume in litres x RPM x Volumetric Efficiency x Pressure Ratio ) / 5660
I tried to find the correct VE for a 1.8l miata engine with a 99 head on miata.net but the only VE i found was for the 1.6 NA which has about 0.85.
I would like to think that the more optimal 99 head and intake etc makes this closer to 0.90 for the MSM.
The calculations I do are not 100% as the VE changes with RPM and other factors trough the power band.
I think I'm not far off if I say it follows the torque curve but to simplify things I use the same VE for all my RPM points.
The engine capacity is 1.839 litres.
With the calculated Air flow rate and pressure ratio we can do some plots in the compressor maps and see how it matches with the efficency islands.
I used the rpm points 3500 and redline 7200 with the same pressure ratio.
That will give me an indication for spool as well as efficiency at maximum CFM at redline. The value for 3500 rpm is only true if it actually is possible to build that much boost. For the 3076 and t3/t04e that is probably not the case.
To make things easier I used this excellent Air flow calculator:
http://www.lovehorsepower.com/CFM1.htm

It generates a table with cfm and lbs values for every 500 rpm and 0.5 psi of boost.

The same site also have a very good and informative article on how to read and use compressor maps with lots of examples :
http://www.lovehorsepower.com/MR2_Docs/compressor_flow_maps.htm

Here is the numbers from the calculator. I sat max rpm to 10K and max boot to 30 psi just to get the flow numbers.

To check that surge is not a problem I used the method described in A. Graham Bell's book.
It could be calculated exactly but then I have to have exact number for manifold volume and IC efficiency.
The easier method is to plot two new points. The first point is at 50% of max rpm at the choosen boost. This is based on the fact that most turbo installations make full boost at 50% of max engine RPM.
The second plot is % 20 of max airflow at the given boost. This point should be plottet at PR 1.0 (bottom of the y axis). If we draw a line between these two points it shold always fall completely to the right of the surge line. 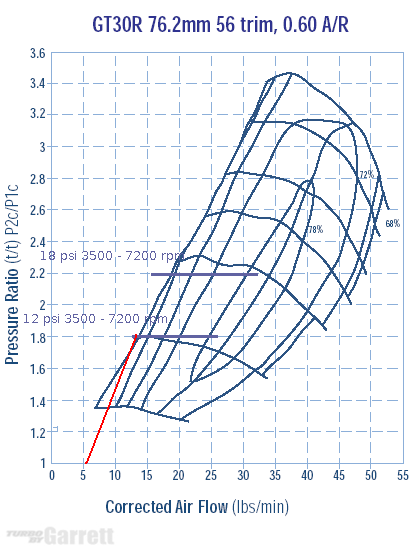 As you can see I plotted two points for for 12 psi and 18 psi and draw a line.
The value at 3500 is outside the surge line but I don't think there is any possibility that I would get 12 psi+ boost at 3500 with this turbo.
What is interesting is that I can operate inside nearly 70% efficiency from ca. 4000 rpm and also touch the maximum of 78% efficiency island with only 12 psi of boost on an 1.8 liter (If we can trust the static 0.90 VE..).
The shape of the map indicates that this turbo needs a lot of boost to take off. At stock redline and a imaginary 30 psi of boost this engine will give about 45 lbs of flow and the turbo will still be around 75% efficient.
If we kid ourselvs even more and set redline to 10000 rpm we could get the same numbers at 18 psi. This explains 800 hp Honda 1.6 engines :) 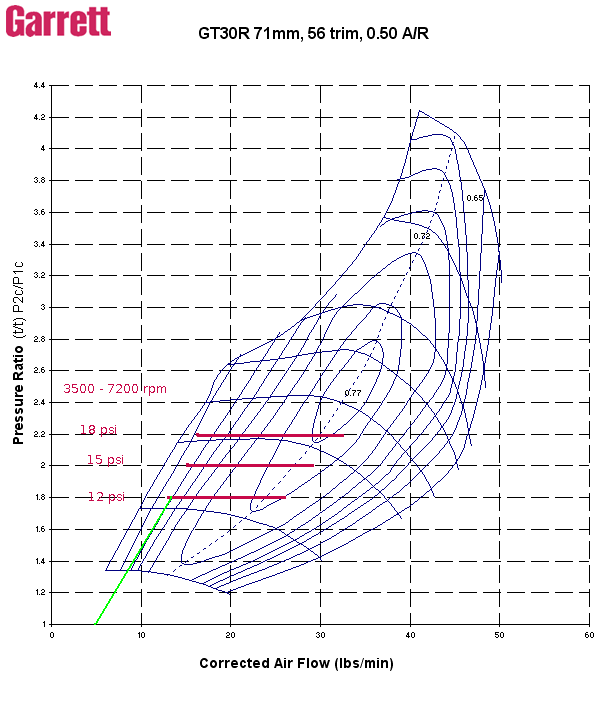 At 12 psi we are pretty much in the outskirts of the map.
It doesn't reach the second efficiency island before 5700 rpm.
I need 18 psi of boost to touch the inner island with the maximum efficiency which would kill my OEM rods for sure.
A pressure ratio of 2.6 (24 psi) would be optimal on this turbo since the map is stretching out in this area. Anyways, this is a good candidate. No surge problems. It's still fairly efficient on 12 psi and lots of room to grow when internals are upgraded.


Lets take a look at the most popular turbo on a Miata, The GT28R, which I already deemed to small for my (future) needs: 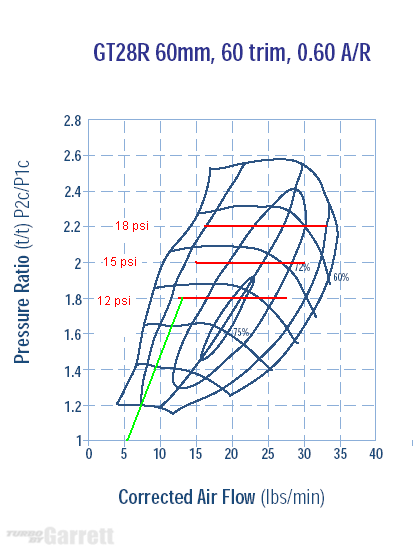 There is no surprise that this turbo fits the 1.8 l BP engine well.
It's hard to find a better matching turbo if the power goal is 250-300 whp and stock internals. Both FM and BEGI knows this and uses this turbo in most of their turbokits.
No chance of surge. At 12 psi the max efficiency island is right in the middle.
It looks like 18 psi is max. With a 7500 rpm limit 34 lbs/min would be possible at 18 psi but at 60 % efficiency. The Other GT30 turbos will do this with a 77/78 % efficiency but at a higher PR.
I think most people would be happy with this baby at 15-18 psi. However, it wont give me the power I'm after.
The last turbo I'll look at is the T3/T04E 50 trim: 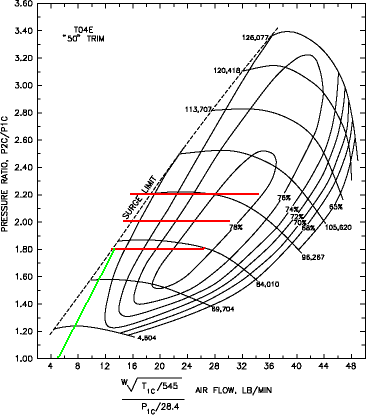 This turbo looks pretty good. For a 2 liter it would be spot on for high power applications.
It is very close to the surge line at 12 psi but I doubt it can produce 12 psi or more at 3500 rpm. The 78 and 75% zones covers most of the map which means the compressor is working with high efficiency at almost any boost pressure.
This turbo can push almost 48 lbs/min, approx the same as the GT3071R.
At $700 this is a very good deal for a built engine.
Conclusion.
That leavs me with the GT3071R.
The map is not perfect. It needs a lot of boost to operate in the most efficient zones and the max efficiency island is kind of small compared to the 3076 and T3/T04E 50 trim.
But it will work with my 300 whp max goal this season and will push 40 lbs/min @ 24 psi and 74% efficiency once stronger internals are in place.
In fact. I just ordered a GT3071R with 0.63 turbine A/R and V-band option from ATPTurbo.com . Life is good...