I got the block back from the machinist a couple of days ago and are now ready to start assemble stuff.<div>I started off with some thorough cleaning with brake cleaner on the cylinder liners and wiped off any residue from the hone and bore. I then oiled the liners with 10w-50 getting it ready for gapping rings.</div><div>I then numbered all the parts/bags with cylinder# not to mix up the gapped rings etc.</div><div>
</div><div>I did a quick cylinder wall to piston clearance check just to be sure the machinist didn’t screw up things. 0.030” was spot on.</div><div> 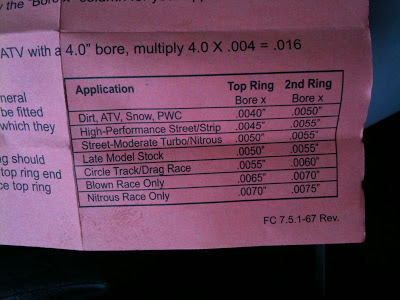 </div><div>These numbers are factors multiplied with the bore in inches.</div><div>
</div><div>With a Cyl bore of 84mm ~ 3.31 inch the Applications of interest calculates to: