IND over at forum.miata.net posted some invaluable data on the different cams available for the MZR engine including Cosworth, Kelford, Tomei and Crower/Massive.

I’ll just quote the entire post here in case miata.net explodes or something.

According to the parts book there are two OEM VVT intake cams and one exhaust cam. I’ve highlighted the difference between both intake cams, it probably is not worth much but if you are doing a 2.5 swap it might be worthwhile to carry over the cam from the 2.0. The exhaust cam is the same across all engines as far as I can see. I’ve looked into the rest of the valve train between the 2.0 and the 2.5 and with the exception of more expensive valve springs available for each engine (same PN 2.0 / 2.5) there appear to be no other differences.

I’ve included some specs shared with me by v67gsr (Tomei, Dynotronics, Massive / Crower) but I have those values in red as I don’t know how they were measured.

My method is as follows: I rotate the cam in a fixture with the lobe acting on a single cam follower which transmits directly to a dial gauge (there is no lash in the assembly). The degree wheel is mounted directly on the camshaft and the value is doubled to obtain crank degrees. I record values as I rotate the cam clockwise (looking at the front of the cam). I only have one example of each cam but I expect the tolerance for these to be quite tight given modern CNC machine tools.

If anyone can add more detail I would appreciate receiving it. 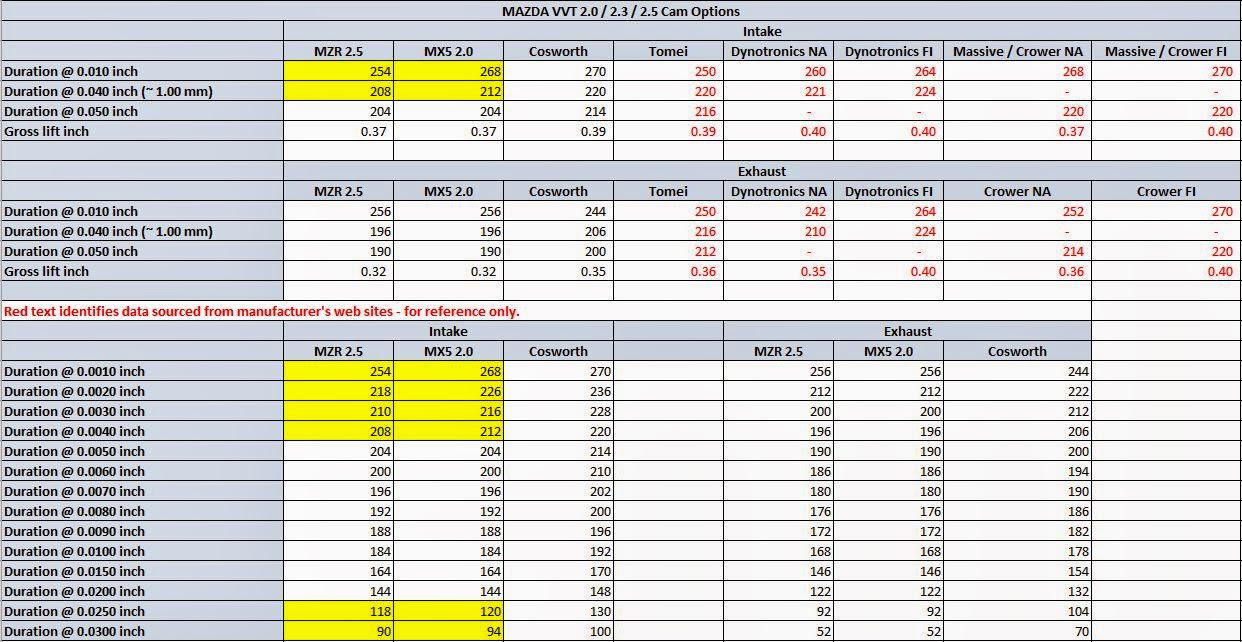 
Inspired by IND’s effort I measured my NC 1.8 camshafts. These are from the non VVT 126hp 1.8l sold in Europe. I did this twice as my first attempt was with a less than optimal degreeing wheel.

I tried measuring duration for different lift as in the table but failed due to patience and tools.

It’s pretty obvious that the 1.8 intake cam is not very good for power. Both lift and duration is way down on the rest of the OEM cams. I suspect it is designed to actually decrease power like the EU only 90 hp 1.6 NA.  A cam upgrade on this engine ought to make a good bump in power.  I would say at least 20 hp with tuning. The exhaust cam seems to have the same lift and duration as the one used on 2.x engines but is numbered with LF17441. Since there is no VVT it might have the same lift/duration but a different lobe separation angle when timed as in the FSM.

For a street car I think the Cosworth cams could be a good compromise between idle/emission and performance. Would probably work with stock 2.0 springs as well as long as stock rpm limit is used.