The last two seasons I have been pushing harder than ever on the track resulting in lower lap times with basically the same engine power.  More optimal driving results in the total load on the engine being higher by applying throttle earlier and shutting off later.  This is very apparent on the IAT which has touched 100C after 10 laps on track during hot weather. At this point the coolant for the IC is boling.

Looking at the compressor map for the M62 as provided by Eaton this comes as no surprise:

I run my FMSC supercharger with  2.8" pulley and  7500 rpm limit resulting in 12-15 psi depending on elevation and weather:

So best case scenario based on CFM = 54 % efficiency. Worst case for SC rpm is 50% based on the efficiency islands in the above map.

If we compare this to a new modern optimal sized turbo like the Garret GTX2860R GenII:

460 CFM ~ 30 LBS/MIN
With the same pressure ratio of 2 and 7500 rpm it would be in the sweet spot with a compressor efficiency of 73%.
The power extracted from the exhaust on the turbine side via elevated pumping losses and added back pressure only 27% is used to heat the air. This means you rob less power to generate the same pressure with less heat.

So why do I even bother to run a Supercharger ?

The low efficiency of the MP62 can only be fixed permanently with a different supercharger.
The TVS1320 would be a perfect fit for my needs with an efficiency of 72% for my pressure and flow needs. But such a kit would never happen for the NC unless I do it my$elf.
Also the quality and design of the FMSC kit is exceptional and the performance on track has been nothing but superb with enough power in its current configuration.
The instant and precise power and control out of corners are key for getting consistency on the track.
I'm sure turbos have evolved since my GT3071 on my NB but  the SC stays and will be optimized until every bit of relible power is put to the ground on the current engine.

Ever since I got my ECU flashed back to the stock map my OEM fuel level sensor started to malfunction.  It shows 1/3 full when the tank is empty. 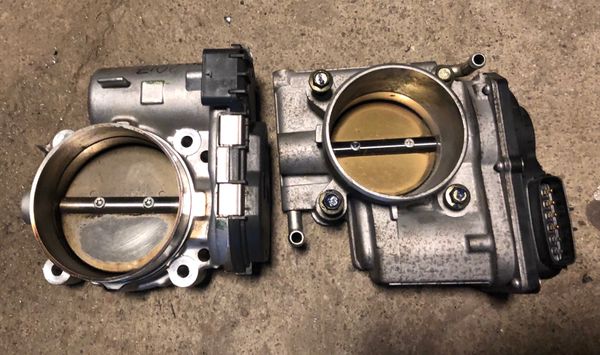 January 2018 the user whalesac on miata.net posted a very detailed post on using the Chrysler 74mm drive by wire throttle body as a replacement for the stock 60mm