After grenading the 2.0 early in the 2020 season I needed a new engine fast.
Building something during COVID19 is hard due to international shipping taking ages from the US.
I ended up with a refurbished 2.3L DI short block from ebay as usual to get the car up and running for August since I was on vacation pretty much all of July.

This is NOT the 2.3L DISI L3-VDT block from the MS3 (which is what I eventually will build) but a L3-VD which is the same tall deck and 87.5mm diameter x 94 mm stroke but N/A piston design and rods. With the DI head it comes with a lower friction timing gear/chain design but everything is interchangeable with other variable timing tall block MZR engines like the L3, L5 and probably some of the Ecoboost as well. All variable timing port injection heads will fit but the front cover and chain/guides must be from L3/L5.

I'll limit this one to 7K since the replacement internals in this block are at best similar to OEM quality (probably not). Since the Rod-stroke ratio of this setup is less ideal than the 2.0 7K the piston speed is about the same as the 2.0 at 7500 ( 21~ m/sec )
The added volume will lower the fixed ratio supercharger boost pressure so the end result is hopefully the same power as before but with better reliability. So I ideally this should give me the same 192 kph top speed on my local track.
If not, a 2.7" pulley or +200 rpm might do the trick.(or BOOOOM)

At least the pistons looks better than the 2.0. Normal oil ring/rail design and the anti friction coating is thicker. Comparison:

Install was uneventful. Since this is the 6th(!) engine this car has seen over the years I'm now a certified Level 9 Ultimate Wrenching Champion in regards to Mazda MX-5 engine swaps . Takes about a week with a couple of hours in the evenings. + a week or more waiting for consumables like head gasket, friction washers, oil pickup(with filter) and front seal. etc.
Almost forgot to plug the balance shaft oil feed.

Installed in the engine fully dressed from the top.

The retune was simple by changing displacement in the AEM tune. But I also did a lot of cleanup and dialed in 11.5 AFR + pulled a deg timing on top as I'm not sure what compression this ended up with.
The longer stroke makes for a duller power band. Not like the dump truck 2.5l which is dead at 6K but less eager at 7K than the 2.0.  I think it's a good compromise as the add volume is noticeable.

I have been fighting a coolant leak for the Water2Air intercooler on the FMSC supercharger for at least a year. The coolant reservoir started loosing coolant during trackdays or spirited driving. This turned into lots of modifications like upgraded heat exchanger, new coolant reservoir 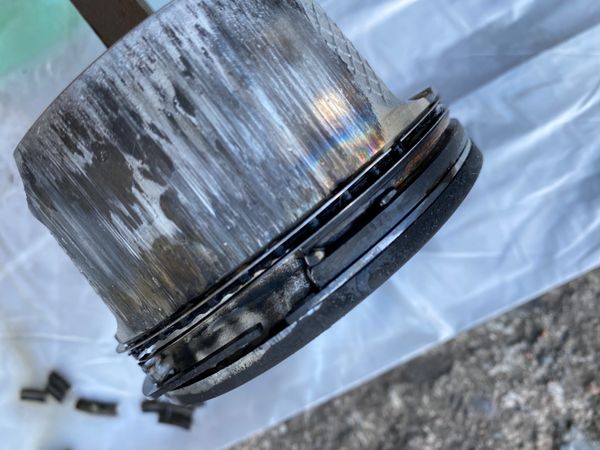 During a trackday  @ Vålerbanen June 7. my 2.0 suffered a piston failure on cylinder #4. Not sure what caused the damage based on the data and the resulting damage.