During full attack for 10+ laps at the track in hot weather I see the intake air temperature touch 100C(!).  It starts at around 60C on a 20C day but after some laps it heat soaks all the way to 100.  I also have had problems with loosing IC coolant which is probably due to it boiling and spewing out the non pressurized reservoir. Se my post on the MP62 compressor efficiency on why this happens.
Time to optimize the intercooling.

I have already upgraded the IC pump and ducting which made a difference but not enough.  The next step is to upgrade the water to air heat exchanger (HE) in the front of the car.

There is nothing wrong with HE that came with the kit from Magnuson:‌‌

Decent sized and can handle the 3.3" and 3.1" pulleys the kit came with fine.‌‌ I also tried mounting it in the front opening to force all air to go trough the HE but that raised the CLT and heated the air into the air box: thread from miata.net

My original plan was to buy the HE used by the BMW F8x cars using W2A intercooling. Cheap, but comes with some funky BMW connectors and non universal mounting tabs. With compatible connectors it would not be so cheap either. ‌‌‌‌
So I found this from cxracing: https://www.cxracing.com/heat-exchanger/HE008

Overall Size: 22x15.5x2 Inch    Core Size: 19.5x15x1.6 Inch.‌‌Executive summary: It's as big as my CF main radiator LOL.‌‌  AND it's no dual pass BS which means the freshly cooled water exits on the intake side of the car making the plumbing even shorter.  Reality check on "dual/tripple pass radiators" :https://www.dewitts.com/blogs/news/11919033-what-is-a-double-pass-radiator .

Comparison with the old cooler. The end tanks is the same thickness but the core is thinner:

Since I have no AC I used used the mounts for the condenser. The radiator is holding the weight of both coolers.‌‌‌‌Work in progress for the brackets before removing excess material. The aluminium profiles was once sparco bucket seat mounting rails:

Test mounted on the car. The power steering cooler fit with some persuasion:

Details of the outlet side of the cooler: The outlet fit perfectly above the condenser mount and has a straight shot to the intecooler inlet by using one of the leftover hoses from the kit with the 90 deg bend at the end.

IC inlet hose routed by the frame rail between the ECU and fuse box.

Very happy with the layout, routing and fitment. Down from 7 tight 90 deg bends to 3 and probably 1/4 the length of hoses.  Very low pressure drop due to more than doubling of (wider) tubes but same length. The total capacity, surface area and tube/fin count is probably x 3 considering the thicker core.

So. Does it work ?‌‌ Due to an upcoming Nürburgring trip I did not attend any of the remaining trackdays in september here in Norway.‌‌
Bad weather and a lot of accidents on the Ring meant I only got 6 laps(!) in two days, and none of them in full attack mode.‌‌‌‌ But at least here is some logged data from the Grüne Hölle entry until about Flügplatz where I got more or less dry track and little traffic. The rest of the lap was yellow flagged.

53 C IAT, about 20 C ambient. Boost was around 12 psi. which is lower than what I have seen at my local track. Could be elevation.‌‌ I would expect higher IAT's if I had the chance to keep the pedal planted the full climb from Breidscheid to Karusell.‌‌The real test will be my local track next year where I have plenty of data. 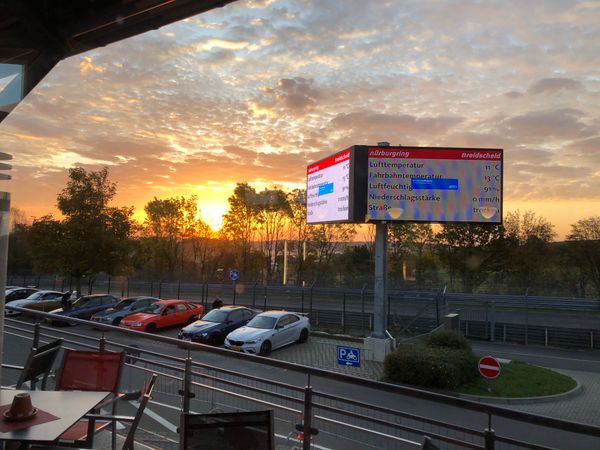 On October 11. it was time again for a trip down to the legendary Nürburgring race track in Germany. I think this was my 6th time , all of them with

Ever since I got my ECU flashed back to the stock map my OEM fuel level sensor started to malfunction.  It shows 1/3 full when the tank is empty.